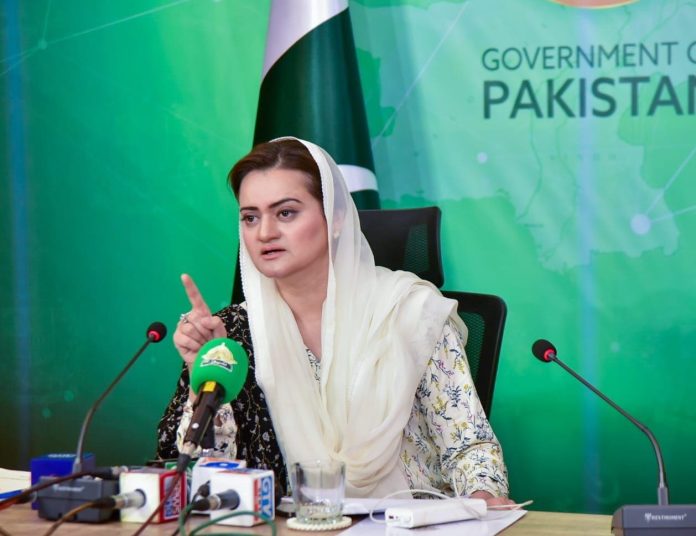 ISLAMABAD: Minister for Information and Broadcasting Marriyum Aurangzeb on Tuesday said instead pointing a finger at others Pakistan Tehreek-e-Insaf (PTI) Chairman Imran Khan should better introspect and issue a white paper on the corruption, loot and wrongdoings during his four-year misrule.

The minister, in a media talk, rejected the white paper issued by the PTI on the current economic situation, saying those who had pushed the country to the brink of default should be ashamed of themselves for their own “misadventures”.

“This is not the white paper rather a record of Imran Khan’s own evil deeds which were already being exposed every other day,” she said, asking the PTI chief to apologize to the nation for rendering a lot of countrymen unemployed, unleashing extreme inflation, taking record foreign loans and ruining the national economy during his government from 2018 to April 2022.

The white paper seemed to be an attempt on his part to hide his “sinister deeds”, but it would not help legitimize his “family corruption”, she added.

“Imran Khan should stop staging dramas as the people fully know about his corruption, wrongdoings, loot and plunder, and conspiracies against the country,” the minister said.

Marriyum accused Imran Khan and his wife Bushra Bibi of “doing black magic”. Their “evil deeds” had put the country on the verge of default.”

She said the economic growth rate was at 6 percent, with inflation at the lowest level, the China Pakistan Economic Corridorr in full swing and terrorism fully wiped out when the Pakistan Muslim League-Nawaz’s (PML-N) previous government completed its tenure.

Pakistan, she added, was progressing at a fast pace and was self-sufficient in energy resources, with wheat flour being sold at Rs 35 per kilogram and sugar at Rs 52 per kg in 2018, but the situation got worsened when a “fascist, propagandist and incompetent person” was imposed on the country.

The minister said Imran Khan should have issued a white paper on the performance of his government, which was marred by a negative growth rate, high inflation, diplomatic blunders, corruption, and incompetency. Whether he would let the people know about the worst economic situation of the country from 2018 to April 2022, she asked.

Marriyum said Imran Khan’s wrong economic policies brought the growth rate to -1.6 percent from 6 percent in the first year of his government, as the electricity tariff was raised to Rs 26 per unit from Rs 11 per unit and the foreign debt jumped to Rs 45 trillion.

The terrorism, which was wiped out from the country due to the inclusive steps of PML-N leader Nawaz Sharif, was rearing its head again due to Imran Khan’s government policies, she said. Not a single counter-terrorism department was set up in Khyber Pakhtunkhwa where the PTI had in in government for the last nine years, the minister added.

She said he (Imran Khan) should have shared all such details in the white paper instead of the performance of the coalition government which had been in power for only six months.

Marriyum said the PTI remained in government at Centre for three and a half years and had been ruling Punjab for the last four years, but instead of highlighting their performance, its leader had the audacity to issue a white paper on the coalition government’s working.

She asked Imran Khan to issue a white paper with a comparative analysis of his own government with the others. Imran Khan believed that he could mislead the nation but he was destined to fail as the people knew who had traded off Kashmir and ruined the economy to fulfill the commitments in exchange of foreign funds.

She said the coalition government had a clear vision focusing on the well-being of the masses by creating job opportunities, reducing inflation, and restoring mega projects like CPEC.

The minister said the coalition government had taken tough decisions with heavy heart, which were aimed at the uplift of the masses who were bearing the brunt of the wrong policies of Imran-led government.

Marriyum said the PML-N did not support the “culture of audio leaks”, but the leaked audios were the evidence of Imran Khan’s wrongdoings.