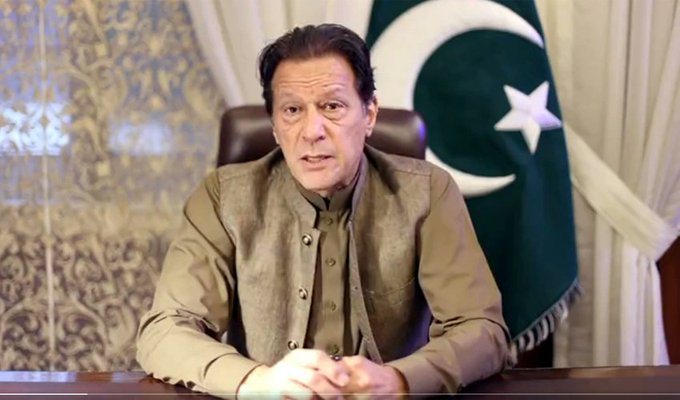 ISLAMABAD: After holding back-to-back consultations with his party’s leadership, Pakistan Tehreek-e-Insaf (PTI) Chairman Imran Khan said Wednesday he would announce the dissolution of both assemblies — Punjab and Khyber Pakhtunkhwa — on December 17. In his address to the nation via video link, the former prime minister said he would announce the date for the assemblies’ dissolution during the party’s public gathering at Lahore’s iconic Liberty Chowk. Soon after his video message ended, sources told Geo News that both assemblies where PTI was in power were expected to be dissolved by December 23. “Once we dissolve both the assemblies, we will hold elections in the provinces. Also, our 123-125 National Assembly members — whose resignations have not been accepted — will ask the speaker inside the assembly to accept their resignations,” Khan said. The address came after he consulted the party’s senior leadership today on important political and economic matters that “required his party to take action”.Following these moves, Khan said as much as 70% of Pakistan would move towards elections and in line with the law, elections should take place within 90 days of the assemblies’ dissolution. “So understand this: I will announce the date on December 17 and after that, 70% of Pakistan will go into election made. Logic dictates that if 70% of Pakistan will see elections, then the country should move towards general elections.” “But unfortunately, our leaders are corrupt and convicts. They do not care about what happens to Pakistan and when bad times take over the country, they will exit the country.,” he said. Khan said the coalition rulers were worried that if they step down then another government would be formed and their corruption cases would be reopened. “Their interests and the nation’s interests are poles apart.”