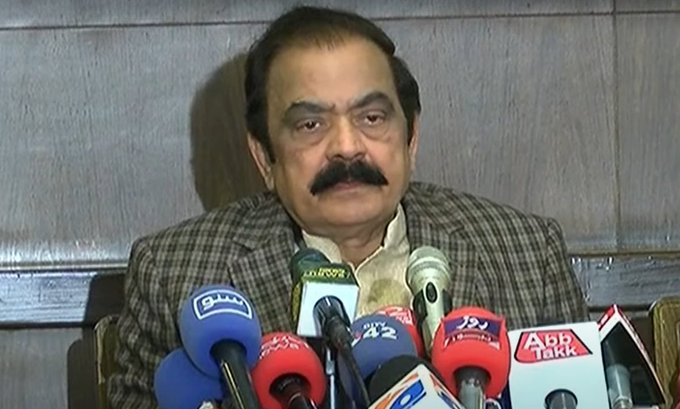 Addressing a press conference here on Friday, he said that negative tactics were used to harm the Sharif family’s repute. He also called upon people to recognise such faces which go to any extent for their vested interests, adding that the PTI chairman caused an irreparable loss to the country through his actions.

Rana Sanaullah said that negative propaganda was created over money-laundering issue, but no charges were proven against any member of the Sharif family. He said that even Britain’s National Crime Agency (NCA) closed the investigation against Shehbaz Sharif after failing to find any evidence. He said that Imran Khan had been exposed fully in Toshakhana case, adding that all receipts submitted to the courts by him proved to be fake.

He said that Imran Khan was not even in a position of giving clarification about the accusations he was facing.
He said that Farah Gogi was facing corruption allegations of Rs 12 billion, adding that Al-Qadir Trust and Toshakhana were big stories of corruption.

He said that the National Accountability Ordinance 1999 law had been improved, so that it might not be used in future for political victimisation. A decision had been taken at the Pakistan Muslim League-Nawaz (PML-N) Punjab level to actively contest the Punjab Assembly election, and preparations in this regard had been launched.

With regard to the party’s election campaign, Rana Sanaullah said the party had divided the nine divisions of Punjab into three regions, adding that committees had been formed to meet the party leaders and nominate two candidates in each constituency within two weeks.

He said, “The committees will consist of senior PML-N parliamentarians. They will meet the sitting MPAs and those interested in contesting the election. They will visit every constituency and finalise two candidates from each constituency within two weeks.”

He said that then the committees would forward their recommendations to the party leadership, who would make a decision on the candidacies.
He said that Imran Khan tried his best in the last seven months to create instability in the country and challenged the PTI chief to implement his decision of dissolving the [Punjab and KP] assemblies and stop giving dates. He said the PML-N was ready to deal with any political situation. The interior minister said that the next elections in Punjab would clear all doubts of Imran Khan.

He said that Prime Minister Shehbaz Sharif had talked about charter of economy in the larger interest of the country, but the PTI chief had never taken it seriously. He said when Imran Khan was levelling baseless corruption allegations against PML-N leadership, he himself was also committing corruption at that time.

To a query, he said that FIRs [first information reports] against Azam Swati and Shahbaz Gill were not registered on political basis.
To another question, he said if Suleman Shehbaz extended his support to the PML-N in politics, it would be a good addition for the party.
Azma Bokhari was also present.