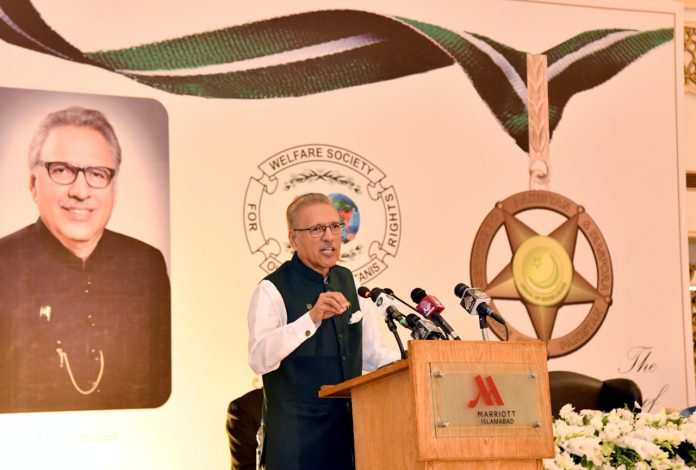 KARACHI: President Dr Arif Alvi on Sunday said that all stakeholders should come forward to make aware the people of preventive and precautionary measures to avoid and overcome the growing diseases in the country.

He said that the doctors played vital role in the Covid-19 time and advised the people to adhere to the preventive and precautionary Standard Operating Procedures (SOPs) to defeat the disease.

He stated this while addressing an award distribution ceremony of Baba Farid Free Eye Camp Trust to honour trustees, doctors and volunteers, who were serving for last 33 years to eliminate blindness from Pakistan hosted by the former Chairman of Senate Senator Mohammed Mian Soomro, who is also patron-in-chief of the Haji Razzak Janoo Memorial Trust here. First Lady Samina Alvi was also present in the ceremony.

Dr. Arif Alvi while appreciating the services of the doctors and volunteers to the cause of humanity, said that the treatment of weak eye sight was present and the eye patients were being treated.

He said that our society was unaware of the preventive and precautionary steps to avoid diseases and he stressed the need for making them aware.

The president said that the treatment was expensive in the country due to the lack of resources.
Dr. Arif Alvi said that mental stress was currently a big issue and around 24 percent of the population of the country was suffering from it. He said that one person from every single family was prone to mental stress.

He said that society should not get their children tempted to mint only money and merely chase their goals but they should also be left to spend their life in a relaxed and suitable manner.

President Dr. Arif Alvi said that the country’s 9 percent population was affected by Hepatitis, which was just a self-created situation and could be prevented.

Emphasising, the president said that about 10 percent population of the country were Persons With Disabilities (PWDs) and work could be done for them outside of the government as the latter could not dealt with it alone.

He said that they were desired to bring PWDs to formal schools. He further said that there was a dire need to change minds to introduce a positive change in the society.
Later, the president distributed the awards among the trustees, doctors and volunteers of the trust.