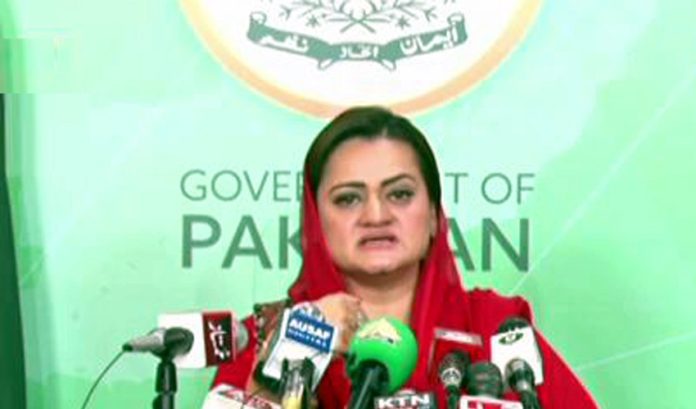 Addressing a press conference, here, she said “Imran Khan is in grief as his failed long march had been changed into work from home”.

“Our watches show us the time, Imran Khan’s watch has shown him his reality (‘ auqat’), she said while taking a jibe at the PTI chief.

She lamented that Imran Khan allegedly sold the watch “having image of the Holy Kaaba” for a few “pennies”.

She said that today’s address of Imran Khan convinced them (the government) that he (Imran Khan) had not been hit by the bullet but was hit by grief and sorrow due to failed long march, she alleged.

She, however, clarified that revealing the facts regarding Imran Khan did not mean she was mocking the PTI chairman as he was bedridden due to injury.

The minister said that she was responding to a healthy man who was in the habit of speaking lies, levelling allegations and slandering his opponents including Maryam Nawaz.

“Mr. Imran Khan ! People are not foolish and unwise to believe your lies and false allegations,” she said.

The minister said that the people of the country had understood the real meaning and moto behind the “Haqaqi Azadi March” as they could not be befooled any more.

“When the no-confidence motion came against Imran Khan, he (Imran) said that there was a US conspiracy that wanted to impose an imported government,” she added.

She said that Imran Khan was a “hypocritical person” who always took U-turns and changed his stance frequently as he (Imran) believed that the people of the country were “fools” who would believe in his propaganda of lies.

Marriyum said that first time in the history of Pakistan, the motion of no confidence was tabled through the constitutional method in which the allies of Imran Khan voted against him.

She said, after realising that the no-confidence motion would be successful, Imran Khan in the closed door meeting had offered to the Chief of Army Staff extension for an indefinite period.

She said that in public Imran Khan made sarcastic statements like Mir Jafar, Mir Sadiq and called neutrals as “animals”.

She recalled that when the no-confidence motion was moved by the opposition, it was accepted by the then speaker and allowed discussion before voting on it.

“When Imran Khan was convinced that the no-confidence movement would be successful, he adopted the narrative of an external conspiracy,” she added.

The minister also played video clips of Imran Khan during a press conference in which Imran Khan purportedly took various stances after the no-confidence motion tabled in the National Assembly.

She said that Imran Khan misguided the public by “telling lies and frequently cheating people”.

She recalled that when the no-confidence motion began to succeed, Imran started “threatening to shut down the entire country”.

She said that Imran Khan had forced the then National Assembly speaker and deputy speaker “for the violation of the Constitution” and during the meeting with his party members, he asked them to keep “playing with cipher”.

She said that Imran Khan then illegally dissolved the National Assembly to save his government but the Supreme Court of Pakistan reversed Imran’s “unlawful and unconstitutional action”.

The minister said that during the last six months “Imran Khan has pursued a malicious campaign against state institutions”.

She alleged that Imran Khan had badly damaged the foreign policy of the country during his tenure.

The minister said that the man who said “absolutely not” was now “apologizing” to the US by saying “it is over and behind me”.

“Imran Khan, it was not over and it was not behind us, it was in front of us and you will have to answer,” she added.

The minister said, “Imran Khan talks about creating Madinah state in front of the people, by giving “Islamic touch”, but unfortunately behind the doors he set a shop to sell Toshakhana gifts”.

She reminded that Imran Khan’s claim of filing cases in courts had not been fulfilled even after the passage of thirty-eight hours today.

She quipped Imran’s legal consultation had not been completed to file a case in the court in the wake of Toshakahana scandal.

She demanded Imran Khan to provide receipts instead of spending so much money on lawyers’ fees.

Marriyum said that Imran Khan stole the wristwatch from Toshakhana allegedly without depositing money and Toshakhana gifts to Umar Farooq.

The cash amount after selling the watch was brought through a chartered plane, she further alleged.

“Imran has bragged that he would file defamation suits (against a private media group, anchorperson and Umar Farooq) in United Arab Emirates (UAE), United Kingdom (UK) but his claim is yet to materialize.”

Marriyum Aurangzeb lamented that Imran was shedding “crocodile’s tears” about the absence of an affordable and effective justice system in the country. The provincial government of Khyber Pakhtunkhwa had locked Provincial Accountability Bureau (NAB), she said.

“He[Imran Khan] is holding the reins of Punjab government, he should start delivering affordable justice to people in the province,” she added.

She said Imran Khan said he would conduct medico-legal examination from a private hospital. She said as per his statement, he should also amend the law and allow all people of Punjab to conduct their medico-legal from any private hospital to strike balance and fairness.

Imran is stressing to register the First Information Report (FIR) of his choice against some officials sans presenting any solid proof of their involvement, he should allow all to get this facility,” she again quipped.

“Imran should dissolve the Punjab and Khyber Pakhtunkhwa assemblies as if he is so powerless and incapacitated,” she challenged the PTI chief who had in the past raised the outcry that he could not even register the FIR of his own choice.

“Imran has not yet appeared in a defamation suit filed against him by Prime Minister Shehbaz Sharif,” the minister said.

She said Imran had not declared in his tax returns the cash amount he received after “devouring” Toshakhana gifts, “grabbing lands in collaboration with mafia, corruption in power projects, and mishandling of LNG deals”.

The prime minister, in his foreign visits, was made aware about Imran’s different stories from the hosts of visiting countries which she said was “disgusting”.

“Imran will have to be accountable for his wrong deeds and destruction caused to the country’s economy,” she said.

Castigating Imran Khan over his criticism on government for not starting sugarcane crushing season, she said, it was a devolved provincial issue and Imran should better direct his Punjab government to allow crushing which they were not allowed for the reason best known to them.

During the tenure of Imran Khan people managed to get one kilogram sugar after standing in long queues for hours. She said that now Imran was showing no confidence over his Chief Minister Pervaiz Elahi.

“Imran is provoking people to join his failed long march against cruelty and injustice. He should tell which cruelty he had endured,” she asked. The minister said cruelty was if a person and his daughter were incarcerated without any warrants.

“Nawaz Sharif, Shehbaz Sharif and Maryam Nawaz were virtually dragged into jail without obtaining any arrest warrants from the concerned authorities,” she recalled.

Replying to a question regarding Finance Minister Ishaq Dar’s meeting with President Arif Alvi, Marriyum Aurangzeb said that the Ministry of Finance had issued a detailed press release which was the official version of the meeting.

To another question, she said that during the PTI’s rule, PTV withdrew its claim to telecast the FIFA World Cup as the then regime wanted to give its airing rights exclusively to A Sports, “the blue-eyed channel of the then rulers”.

The minister said during the past few months the present government was in talks with FIFA management and hopefully PTV would telecast the matches of the World Cup live which would not only help the PTV to improve its financial position but also provide viewers an opportunity to watch the event live.

To another question, she said that the appointment of new chief of army staff was the prerogative of the prime minister and he would fulfil his constitutional responsibility.

She said that Imran Khan’s claim of the media being under pressure (in PML(N) government) was “totally bogus”. She said Imran’s speeches were being telecast by all news channels without any hindrance, whereas Imran during his tenure banned the sound bites of Nawaz Sharif, Marriyum Nawaz and even Shehbaz Sharif.

She went on to allege the media watchdogs at international level used the word “predator” for Imran during his tenure against the alleged censorship of media.

She said that FIA was conducting an inquiry on PTV sports’ rights issue and it was in the final stages.

She recalled that she had held a press conference a few months back in which she disclosed how A Sports was awarded the television rights contract in violation of terms and conditions.

She said when the tender for expression of interests was published, A Sports had no licence issued from PEMRA.

She said Imran’s claim of the present government’s borrowing and increase in unemployment was fake.

She said it was Imran Khan’s regime which broke the record of 75 years of borrowing within four years of tenure and rendered “8 million people jobless during his government”.