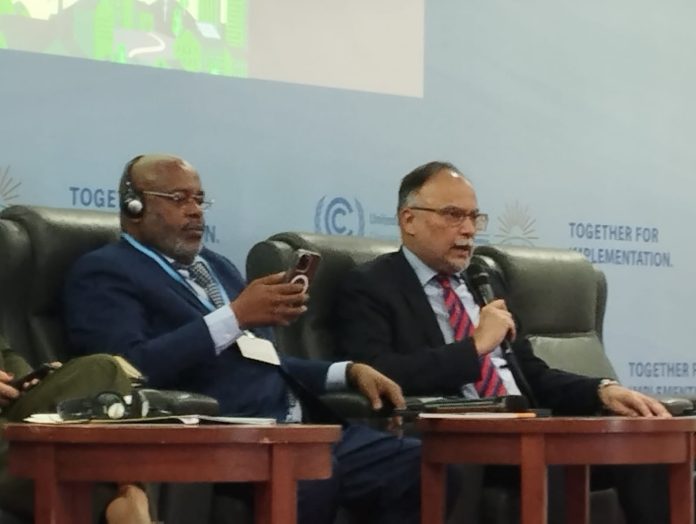 ISLAMABAD:Minister for Planning, Development and Special Initiatives Ahsan Iqbal on Thursday said that promoting green investment in Pakistan was top priority of the government to tackle with the growing environmental issues.

The minister said the government was taking steps to promote various sources of renewable energy including solar energy and it would discourage use of fossil fuels for electricity production.

He was speaking in the panel discussion at the launching of “Friends of Greening National Investment Plans in Africa and Developing Countries Initiative” on “Solutions Day” hosted by Minister for Planning and Economic Development Egypt Dr. Hala El-Said on the margins of COP27 Climate Conference in Sharm El-Sheikh.

He informed that the government had initiated a project for production of 10,000 MW electricity through solar panels.

Ahsan Iqbal said the government was also planning to elevate the 20 most backward districts of Pakistan through sustainable development.

He said in Pakistan, it was mandatory for each project to be at par with the environmental standards.

Pakistan, he said was contributing less than 1% in the global warming but still it was among those top seven countries which were vulnerable to the climate change risks.

Climate change is causing record heat, torrential rains and flooding in Pakistan, he said adding that climate change’s impacts are not a fiction but have become reality now.

The minister maintained that climate change issues have directly affected 33 million people in Pakistan. He added the international Monetary system had failed to cope with the agenda of climate change.

He also called for establishing a special fund on the international level to develop infrastrucutre adapt to the climate change risks.

He asked the developing countries to share their experiences about the climate change impacts to cope with the matter in a better way.