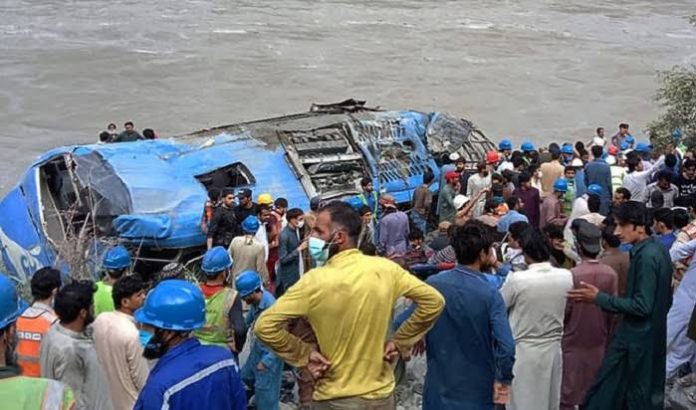 ABBOTTABAD: A special Anti-Terrorism Court (ATC) on Friday handed over death sentence on 13-counts to each of two accused in Dasu Hydro Power Project (DHPP) terrorist attack case.The court also imposed Rs 40 million fine on the two convicted terrorists, besides awarding them a total of around 800 years of imprisonment; including life imprisonments. All the sentences shall run concurrently. Benefits of Section 382–B CrPC has also been extended in favour of the accused.ATC Special Court Judge Sajjad Ahmed Jan delivered the verdict in a camp court, established at Central Jail Haripur (CJH) after the completion of the case hearing where the two were found guilty and sentenced 801-year imprisonment. The court also issued orders to release the four other accused for not being guilty.The ATC special court sentenced the accused Muhammad Hussain, alias Syed Muhammad alias Zawan alias Mama, son of Abdul Rahim age 49, resident of Sabin Burat, Tehsil, Matta, Swat, and Muhammad Ayaz, alias Jan, 42, resident of Zurai Balu Jabril Tehsil, Matta Swat, and awarded each a 13-count death penalty and 801-year imprisonment. The court also imposed Rs 40 million fine on the convicts.

The court ordered hanging each convict on 13 counts for the crime under section 302 PPC (on 13 counts) and 7(A) ATA. They were also imposed a 1.5 million fine per victim which the heirs of the deceased, would receive and ordered one-year additional imprisonment in case of non-payment of the fine by the convicts.

The other punishments that were awarded to both convicted were under section 21 (I) ATA 1997, sentenced to life imprisonment and six months in prison in 202 PPC. The court acquitted both the accused as the charge in Section 353 PPC and section 21-J ATA were not proved.

The special ATC ordered to release four other accused in the case including Shaukat Ali, Anwar Ali, and Fazal Hadi residents of Matta Swat and another accused who was already on bail, was also acquitted.

On July 14, 2021, ten Chinese engineers and three Pakistanis workers were traveling to the Dasu Hydro Power Project construction site when their bus suddenly plunged into a deep ravine after an explosion on board. The incident led to the death of at least 13 people, including Chinese engineers, two FC officers, and two laborers.