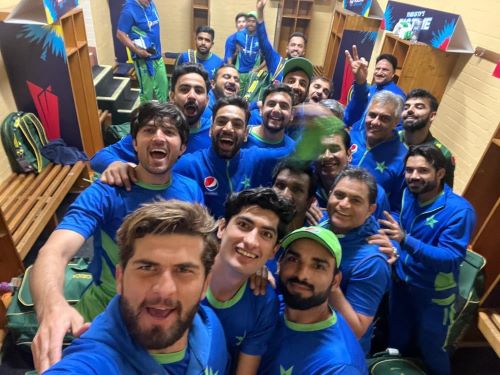 LAHORE:Pakistan cricket team may become the only team to win two cricket World Cup finals at the same venue if they manage to win the final of the ICC Men’s T20 World Cup in Melbourne on November 13 (Sunday).

It was on March 25, 1992 when Imran Khan-led Pakistan won the ICC Men’s ODI Cricket World Cup in Melbourne while Babar-led Pakistan T20 squad may write their destiny with another sterling performance.

The first semi-final has already witnessed many records on a day which belonged to the Babar-led Pakistan contingent who outclassed New Zealnad in almost all departments in a match for the T20 World Cup glory.

Pakistan became the first team to qualify for the third finals of the ICC men’s T20 World Cup after they beat New Zealand by seven wickets in the chase of 153 runs in the first semi final at the Sydney Cricket Ground (SCG) on Wednesday.

Captain Babar Azam and wicket-keeper batter Mohammad Rizwan scored yet another 105 runs for the first wicket to break the back of a daunting total on a sluggish SCG pitch. In the process of becoming the only pair to score nine century-run partnerships in T20I competitions, Babar Azam and Muhammad Rizwan became the only pair to strike three century-run partnerships in the ICC Men’s T20 World Cup matches.

Babar Azam (53 off 42 ) and Mohammad Rizwan (57 0ff 43 balls) both hit their maiden half-centuries of the global event in Australia while returned to form in the all important semi-final after he had scored 39 runs in the previous five innings of this year’s tournament. Babar repaid the confidence of the team mentor Matthew Hayden who had said the other day that Babar was a big match player and perform in the big match like the semi-final against New Zealnad. Mohammad Rizwan was adjudged Player of the Match for his all-round performance with the bat and the gloves.

The hard-hitting sensation Muhammad Haris scored useful 30 runs off 26 runs and was out in the penultimate over off the bowling of Mitchell Santner with Pakistan needing 2 runs off 6 balls in the last over. Shan Masood hit the winning runs to ensure there were no more blips in the chase.

Trent Boult and Mitchell Santner were the only successful bowlers for New Zealand who claimed two and one wicket respectively for 33 and 26 runs each. Lockie Fergusan conceded 37 runs in his quota of four overs while Ish Sodhi also returned wicketless for 26 runs. Tim Southee gave away 24runs in 3.1 overs without success.

Earlier, Pakistani bowlers stood true to their reputation of the best bowling attack of the ICC Men’s T20 WC 2022 Australia when they restricted New Zealand to 152-4 after New Zealand won the toss and decided to bat first. Shaheen Shah Afridi was the destroyer-in-chief who claimed two wickets for miserly 24 runs off his quota of four overs while the other successful bowler was Muhammad Nawaz (1 for 12) who claimed the wicket of Glenn Philips (6 off 8 balls).

Pakistani bowlers kept the New Zealanders under pressure from the beginning after Afridi claimed the all-important scalp of Finn Allen in the opening over of the match while Conway fell to a superb throw by Shadab Khan on the last ball of the power-play in the sixth over.

Captain Kane Williamson and Daryl Mitchell coined 68 runs in 50 balls but Williamson (46 off 42) fell to a well-disguised slower ball by Shaheen Shah Afridi in the 17th over. Mitchell played an aggressive knock  of 53 n.o. off 35 balls and helped New Zealand post a competitive total of 152 runs on a sluggish pitch. James Neesham hit 16 runs off 12 balls.

Pakistan will meet the winner of the second semi-final to be played between India and England at the Adelaide, Oval on November 10 (Thursday).