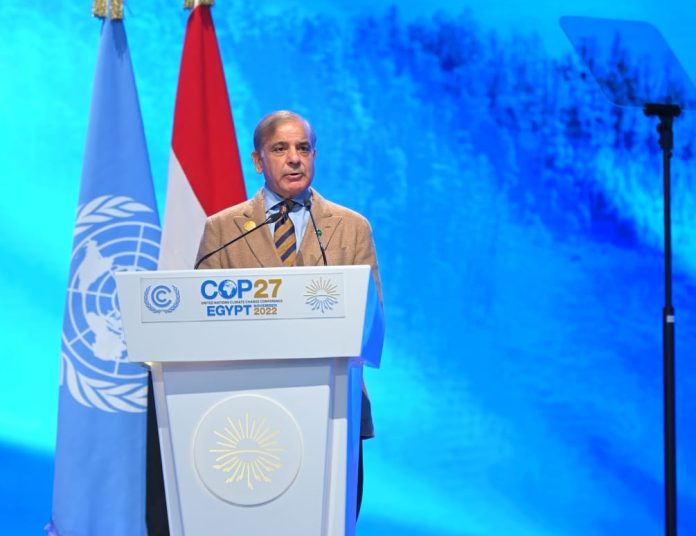 SHARM EL SHEIKH: Prime Minister Shehbaz Sharif on Tuesday sensitizing the international community on the plight of flood-hit Pakistan, said the country needed additional funding, not debts, to rebuild a resilient and adaptive infrastructure as the financing gap was widening by the day.

“We have to fight and rebuild a resilient and adaptive infrastructure which can only be done through additional funding, not loans and debt… But the gap is widening by the day. It is the duty of the global north to understand our plight,” the prime minister said in his National Statement at the COP27 summit held here.

He told the international gathering that climate change-induced catastrophic flooding in Pakistan had impacted 33 million people -the size of three European countries – with more than half being women and children.

He said that the floods had destroyed over 8000 kilometres of highways, damaged more than 3000 kilometers of railway tracks and washed away crops over four million acres.

The Post-Disaster Needs Assessment estimates over US$ 30 billion in loss and damage, he added.

He said Pakistan suffered the manmade disaster despite less than one percent contribution to the carbon footprint.

He told the gathering that the flood-hit Pakistan had to import wheat, palm oil, and “very expensive” oil and gas spending around $32 billion dollars.

He said the country had also redirected its resources to meet the basic needs of the millions of flood-affected households.

He said Pakistan was spending billions of dollars from its own resources to provide shelter, homes, medical aid, and food package to millions of people.

“How one can expect us to carry out this gigantic task on our own?” he questioned and thanked the international community for extending support to Pakistan for the relief of the flood survivors.

Highlighting Pakistan’s priorities, the prime minister emphasised prioritizing the Global Goal on Adaptation both in terms of financing and timelines. The current financing gap is too high to sustain any real recovery needs of those on the frontlines of climate catastrophe, he added.

Secondly, he said the Loss and Damage needed to be part of the core agenda of COP 27 to meet the pressing humanitarian needs of those who were trapped in a crisis of public financing fueled by debt and yet have to fund climate disasters on their own.

Thirdly, Prime Minister Shehbaz called for clearly defining climate finance as new, additional and sustained resources with a transparent mechanism to meet the needs of developing and vulnerable countries with the required speed and scale.

“We have been talking for years. But have failed to even agree on the basics. Pledges made at the Copenhagen COP 15 in 2009 for mobilizing USD 100 billion per annum by 2020 have still not been realized. They need to be enhanced given the increased frequency and intensity of climate extreme events,” he urged.

Moreover, the prime minister also called for the creation of a Global Climate Risk Index of all parties of the UNFCCC where the projects from the most vulnerable countries must get prioritized and speedy approvals for climate finance.

Besides, he said the mitigation ambition needed to be revived in a clear burden-share formula.

He said Pakistan’s 2030 ambition in the NDCs were already higher than many countries and that the country was heading towards a Net Zero plan.

Prime Minister Shehbaz said the COP27 summit rang an alarm bell for humanity as it was the only platform where the vulnerable countries took their case to the rich and the resourced, to build a common purpose for justice, carbon neutrality and a roadmap to crucial policy resets.

He said the bargain between the North and the South would not work unless there was a transformational shift in the flow of capacities, finances and technology that reversed the pyramid of climate capital.

He said the COP might have a real chance to find common ground toward achieving the objectives of the Convention and the Paris Agreement.

“It is now or never. For us there is indeed no Planet B,” he concluded.