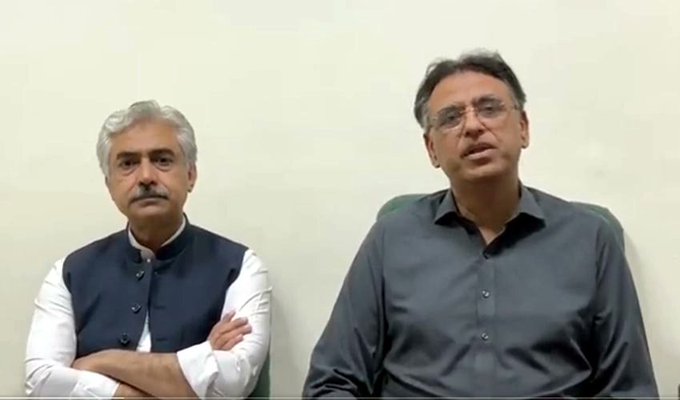 ISLAMABAD: PTI Secretary-General Asad Umar claimed Thursday that party chairman Imran Khan suspects three people — Prime Minister Shehbaz Sharif, Interior Minister Rana Sanaullah, and a senior military officer — are behind the assassination attempt on him. The former prime minister was injured in an assassination attack on him earlier today when a man opened fire at him.  “Imran Khan has said that he had the information beforehand that these people might be involved in the assassination attempt on him,” Umar said during a video statement alongside party leader Mian Aslam Iqbal. Umar, quoting the PTI chairman, demanded that all three people the premier, the interior minister, and the senior military officer “be removed from their offices.” The PTI leader added that Khan has warned that if these officials are not removed from their officers, then the party would hold countrywide protests as Pakistan cannot run in this manner anymore. “If the demands are not met, then all the party’s workers are awaiting Khan’s call, and when he does give that call, then protests will take place across the country.” Umar said that he spoke to the doctors — including Dr Faisal Sultan — about Khan’s situation and they have informed him that his condition is stable and out of danger. “The doctors said that bullets hit him and at this time, it is unclear as to how many they were. Three or two pellets are still lodged in his leg. The bullet also chipped his bone. The CT scan is also clear.” “Khan is ready to sacrifice his life for the nation. There should be no doubt about it now. He is fine, but he says that we should always believe in Allah,” Umar said. PTI Senior Vice President Fawad Chaudhry, speaking to Reuters, said: “It was a clear assassination attempt. Khan was hit but he’s stable. There was a lot of bleeding.” “If the shooter had not been stopped by people there, the entire PTI leadership would have been wiped out.” PTI Vice Chairman Shah Mahmood Qureshi condemned the attack on Khan and said the former prime minister would now have to move towards his destination with “more force”. Following the attack on the former prime minister during his long march, which left him with a bullet injury on his right foot, the Pakistan Army “highly condemned” the incident. Politicians and government leaders, including Prime Minister Shehbaz Sharif, Foreign Minister Bilawal Bhutto-Zardari, PML-N supremo Nawaz Sharif, PPP Co-chairman Asif Zardari, PML-N Vice President Maryam Nawaz, among other leaders, condemned the incident in “strongest words.”