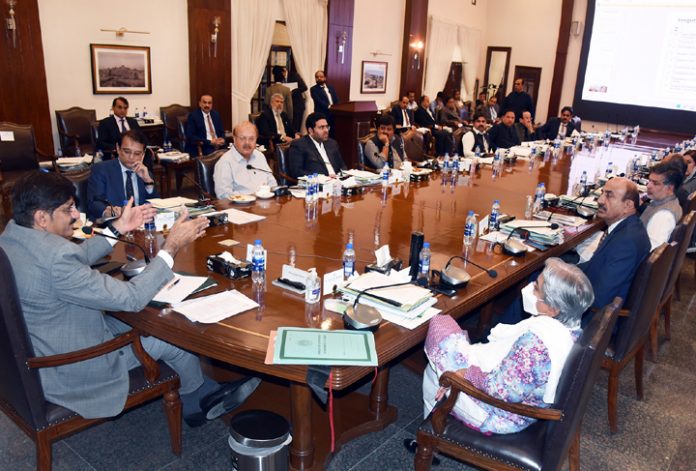 KARACHI : Sindh Chief Minister Syed Murad Ali Shah with the approval of the cabinet has decided to convene a two-day international conference to discuss the destruction caused by floods in the province and explore technical ways to reconstruct the Irrigation & draining system so that future calamities impact could be mitigated.

“Our river system, bridges on River Indus, drainage systems such as RBOD, LBOD, MNV, and flood protection embankments have failed to sustain the impact of heavy downpours and floods of 2022, therefore we have to gather all the experts, including of the world bank to discuss the floods and necessity of redesigning the irrigation and drainage system so that future climate pressures could be sustained accordingly.”

This he said while presiding over a cabinet meeting at CM House on Monday. The cabinet meeting was attended by provincial ministers, advisors, special assistants, chief Secretary Sohail Rajput, PSCM Fayaz jatoi, and other concerned officers.

Mr. Shoro said that previously, a major disaster occurred during the riverine flood of 2010, in which a breach occurred at Tori Bund on the right-side bank of the Indus River. He added that the area inundated during the 2010 flood was about 1.3 million acres and the quantum of water was about 4.9 MAF. Whereas, during recent rain-related flooding on the Right Bank of Indus; an area of around 2.2 million acres was inundated with approximately 14 MAF quantum of water.

Similarly, the heaviest rainfall on the left bank of the Indus inundated area of around 14 lac acres with 8 MAF. The total quantum of rainwater in right and left banks collectively becomes about 22 MAF, which is almost four times the volume of Tarbela Reservoir, Jam Khan told the cabinet.

The major devastation in the shape of breaches/cuts and damages to the structures along irrigation and drainage channels are 5335, including FP Bund, Suprio Bund, MNV, LBOD, RBOD, Manchar containing bund, Small Dams, etc.

It was pointed out that the culturable command area of Sindh is 12,82 million acres whereas, the drainage facility was only for an area of about 5 million acres only to cater to the drainage surplus from the agricultural lands. At this, the CM said that the national and international experts should be invited in December to discuss and guide us in our developing our irrigation & Drainage system.

On 31st August 2022, an area of about 1,292,419 acres (1.3 M Acre) was under inundation along the Left Bank of the River Indus. As of 20.10.2022 an area of 930,855 acres has been evacuated which is about 72 percent of the total inundated area in the Left bank of the Indus. The Balance area of land under water on the Left Bank Side is 361,564 Acres (0.36 M Acre). Water is being evacuated by the existing drainage network (mainly LBOD) through gravity from the parts of the districts Shaheed Benazirabad, Sanghar, Mirpurkhas, Umerkot, Badin, Tando Muhammad Khan, and Tando Allahyar.

District Nausheroferoze, Khairpur, and parts of district Mirpurkhas, Sanghar etc. where there was no proper drainage facility, different options to drain out the standing water were adopted such as new drains were excavated and mobile pumps were deployed at the isolated locations.

Rehabilitation work: The rehabilitation dept told the cabinet that so far 673,867 tents, 545,012 tarpaulins, 3.4 million mosquito nets, 1.995 million ration bags, 807,057 liters drinking water, and 178,980 blankets have been distributed among the flood affected people. The items have been distributed by PDMA, NDMA, Pak navy, Pakistan Airforce, and other organizations.

The cabinet discussed and approved the proposal of the health dept to make it at par with the stipends of the Federal Ministry of National Health Science.

The cabinet considered the request and directed the finance dept to submit its financial proposal. The cabinet appreciated the efforts, and contribution to health services, particularly during the COVID-19 pandemic.

The matter would be discussed in the next cabinet meeting by the time the finance dept would prepare its financial proposal.

Machhar Colony incident: IG Police Ghulam Nabi Memon briefing the cabinet on the incident of Machhar Colony said that two persons, Aimen Javed of Thatta and Ishaq Maher of Naushehroferoze were killed by a mob at Machhar Colony. The killed persons had gone there to check the signals of the mobile tower, but the residents believed them as the abductors of the children and killed them.

The cabinet was told that 15 people identified in the footage have been arrested. An investigation has been started into the incident and the culprits would be brought to book.

The chief minister said that such incidents could not be ignored, and the killer have to face the law. He added that the incident of the Machhar Colony and others in which the mob killed the culprits or considered to be the culprits was a question mark of the public confidence in our police, therefore we have to revisit the laws to discourage the mob justice system and the police have to develop public confidence in them.

The cabinet approved an Rs5 million compensation for each of the Machhar Colony victims and formed a cabinet committee, Imtiaz Shaikh, Murtaza Wahab, Sadiq Memon, IG Police, and Home Secretary to discuss the issue and give its recommendations.

The committee would also assess the need of the creation of a Mob Management Police Force to handle such cases. The force would be imparted relevant training and equipped with the required equipment/arms.

The cabinet offered Dua for the persons killed in the incident and expressed sympathy with the bereaved families.

Upgradation of Prison posts: The home dept presented an item that the cabinet has already upgraded the posts of police, therefore the posts of The Prison dept may be upgraded accordingly. The cabinet upgraded the positions of ASI/Lady ASI/Drill Instructor from Grade BS-9 to BS-11; Head constables/Lady HC/Wireless Operator/Armorer and Prison constable from Grade BS-7 to BS-9 and Senior PC/PC and Lady PC upgraded from BPS-5 to BPS-7.

Trauma Center: The cabinet on the recommendation of the Selection Committee the cabinet approved the appointment of Dr. Muhammad Sabir as Executive Director of Shaheed Mohtarma Benazir Bhutto Institute of Trauma, Karachi.

The cabinet also discussed the proposal for the construction of 1.8 million damaged houses and directed the CEO of the newly established Housing Company Khalid Shaikh to firm up the final proposal for the houses, and their design in light of climate change and mode construction so that it could be approved to start the work.

The CM told the delegation that the proposal for starting construction of the houses was at the final stage. He added that his P&D team and the CEO of the provincial housing company would meet with the world bank concerned team to finalize the plan so that it could be started.