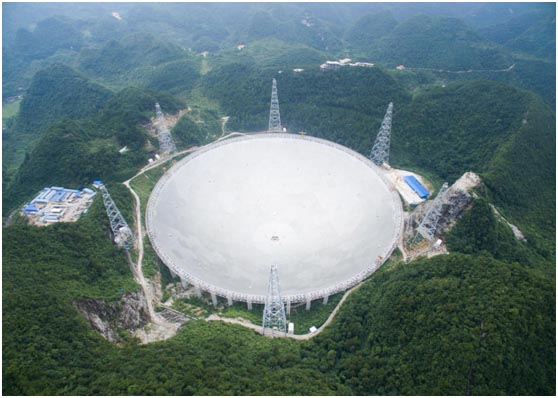 Scientists found the cloud, which is 20 times larger than the Milky Way galaxy, by pointing the FAST in southwest China’s Guizhou province in the direction of a galaxy group called Stephan’s Quintet, which is about 290 million light-years away.

The finding was published in the international journal Nature on Oct. 19.

The observation of gas structures is a very important study in astrophysics, because stars in the universe are born from the accumulation of clouds of atomic gases.

The FAST is an excellent tool to find the interaction between galaxies as well as the origins of the gases between them, which have always been important topics in astronomy.

The FAST is the world’s largest single-dish and most sensitive radio telescope. It is able to detect faint radiation emitted by thin dispersed atomic gases that are far away from the centers of galaxies.

Since the telescope was put into use in September 2016, it has generated scientific outcomes in multiple fields, deepening mankind’s understanding of the universe.

On March. 31, 2021, the FAST officially opened to the world. Astronomers worldwide could submit their applications for observations. The observations by international users began four months later.

The discovery this time was accomplished by Xu Cong, a researcher from the National Astronomical Observatories of the Chinese Academy of Sciences, and an experienced international team led by him which consisted of top experts in infrared astronomy and radio astronomy.

The team applied for observations immediately after the FAST opened to the world.

Noise is inevitable in astronomical observations. For better performance, technicians worked to improve the FAST’s sensitivity and suppress the noise. The telescope reached its optimal state last October and found the thin gases around Stephan’s Quintet.

Cheng Cheng, a member of the team and a researcher from the National Astronomical Observatories, told People’s Daily that the observation took only around a month, with an exposure time totaling 22 hours.

“It was faster than our expectation,” Cheng said.

The latest discovery showed that a mammoth low-density gaseous structure existed in a relatively far location from the center of Stephan’s Quintet. It indicated that more massive low-density atomic gas structures could be hiding in the universe, Xu said.

However, the discovery challenges the current understanding of how such low-density hydrogen gas can survive ionization by the intergalactic ultraviolet background on such a long time scale, Xu added.

The FAST has opened a new window to research the origins of celestial objects in the universe. With the assistance of the FAST, Chinese scientists will join hands with the international scientific