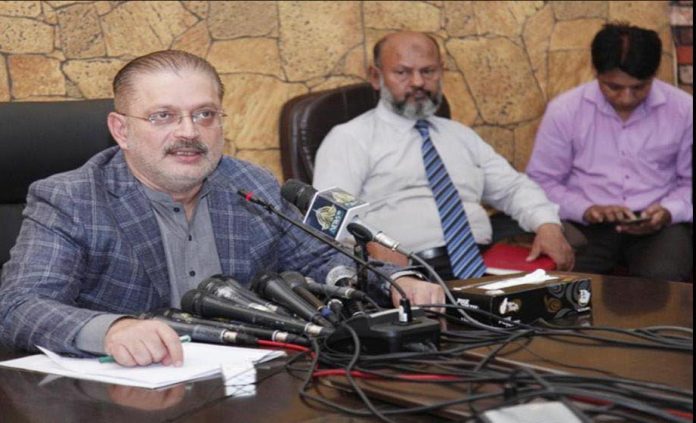 KARACHI ( Reporter ) Provincial Information Minister of Sindh Sharjeel Inam said that the death of Arshad Sharif is very sad. The country has suffered a great loss. These tragic events should be investigated because a political party is taking advantage of them. The Provincial Minister of Information expressed these thoughts while holding a press conference at the Sindh Archives Complex on Wednesday.
He said that with the death of Arshad Sharif, journalism has suffered a great loss.
Pakistan Peoples Party is an equal partner in the grief of Arshad Sharif’s family. Sharjeel Inam Memon said that it should be seen who is the real beneficiary.
Imran Khan said that he advised Arshad Sharif to go out. If Imran Khan is true, then tell him that Arshad Sharif’s life was threatened by someone who told Imran Khan all these things.
He said that when Imran Khan knew that Arshad Sharif’s life was in danger, why did Imran Khan advise him to go out? There are Imran Khan governments in Punjab and KP. Imran Khan has placed police personnel in KPK and Punjab for his security, why did he not provide security to them? Sharjeel Inam Memon said that PTI’s Queen Bukhari said in a program yesterday that people came out for Arshad Sharif’s funeral. The people of Hazara community in Quetta did not attend their funeral. There was no condolence on the death of Dr. Abdul Qadir, who played an important role in making nuclear power in Pakistan. Sahiwal called the victims of the tragedy to the Prime Minister’s House and expressed his condolences. My number is increasing that Arshad Sharif’s murder is being linked to Bani Gala. Arshad Sharif exposed the funding of India and Israel on the foreign funding case. Imran Khan is doing a long march, but fake news is being spread on social media regarding Foreign Minister Sharjeel Inam Memon and Chairman Bilawal Bhutto. He did not sign any permit. False propaganda and gossip related to Chairman Bilawal Bhutto Zardari are being spread. The Minister of Information said that he swears that this person who is Imran Khan’s agent is making conspiracies against Pakistan and this person has to be stopped. He said that Imran Khan is lying that his long march will be peaceful. He has done long march before. He had written that his long march will be peaceful and will not enter the red zone, but later he reneged on the agreement. Vehicles and trees were burnt, PTV was vandalized, policemen were beaten. He said that the agenda of Imran Khan is to destabilize the country. Imran Khan, who has his family sitting peacefully in Bani Gala and London, first brought his family to Long March.
He said that the attack on Islamabad is an attack on Pakistan and we will send the Sindh Police to keep Islamabad safe. This is the duty of the Sindh government. He said that there will be no government on Jalsi, Jalison, and no one will be allowed to spoil the situation in Sindh. There is no youth government in Sindh, if there is a conspiracy to worsen the situation in any city of Sindh, they will be dealt with severely. They don’t have funds to organize jalsi, jalison, dancing, singing and concerts. Sharjeel Inam Memon demanded that the courts should take note of these matters. Sharjeel Inam Memon said that the People’s Party accepts the challenge of Imran Khan, the people of Sindh have given him a crushing defeat, they are talking about conquering Sindh. Sharjeel Inam Memon said that PTI has no position in Sindh, it is only a selfie group. Sharjeel Inam Memon said that something has crossed Imran Khan’s mind that time is short and the competition is tough.