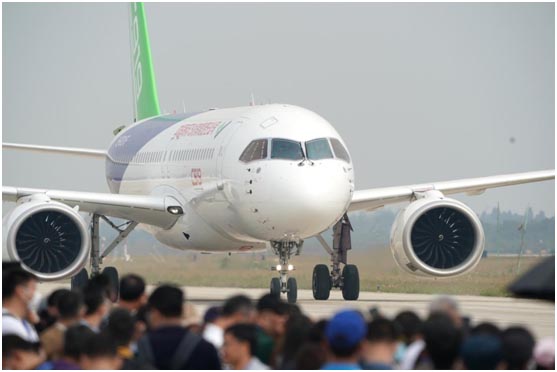 Qian, also vice-chair of the Shanghai Federation of Returned Overseas Chinese, made the remarks during an interview after the C919 obtained the type certificate issued by the Civil Aviation Administration of China.

The type certificate was issued to the COMAC, the developer of the aircraft, on Sept. 29.

The C919, which has been in development for 15 years, is a witness to the leapfrog progress of China’s aviation industry.

Airworthiness certification is a prerequisite step for civil aircraft entry into the market. The C919’s obtaining of the type certificate was a milestone in China’s development of large passenger jets. It indicates that the design of China’s first self-developed trunk jetliner meets airworthiness standards and environmental requirements.

The C919 has independent intellectual property rights. The body of the airplane was designed by the COMAC and jointly manufactured by Chinese enterprises.

Over the past years, the design and manufacturing teams, following independent innovation and open cooperation, have developed a series of key technologies and forged their core competitiveness. They have nurtured a batch of professionals and driven the development of relevant industries, which forms a platform for China’s independent development of large jets.

The C919 took its maiden flight in May 2017. Over the past five years, test aircraft has completed a series of test flights during which its power, electrical and other systems were comprehensively tested. It also went through tests in various types of extreme situations including stall speed, high temperature, severe cold and freeze.

It marked the first time for China to have joined all the development procedures of a large airplane, including designing, manufacturing, testing, test flights and airworthiness certification. It also indicated that China has become a country that is able to develop large airplanes in accordance with international airworthiness standards.

The Chinese trunk jetliner is competitive in multiple aspects, which will help it stand firm in the aviation market.

It is equipped with advanced systems and materials. According to the COMAC, the supercritical wings of the airplane are able to reduce the resistance by five percent. The advanced materials, such as aluminium-lithium alloy and other compound materials, make the airplane much lighter, safer, more economical and more environmentally friendly. Besides, the C919 is equipped with advanced airborne systems and high-performance engines.

The single-aisle plane has 158 to 192 seats and a range of 4,075 to 5,555 kilometers. It comes with an efficient air filtration system and a passenger-centric lighting system.

The safe and reliable C919 enjoys huge potential thanks to the vast Chinese market. It currently has 28 customers with orders totaling over 800 planes.

The development of the large airplane is in line with China’s economic and strategic development. After the C919 is put into commercial use, it will generate positive impacts on China’s civil aviation.

The successful development of the C919 will offer more choices for airlines and passengers, bring more opportunities to the suppliers and cooperation partners, and further activate the healthy competition and innovation of the global commercial aviation industry.