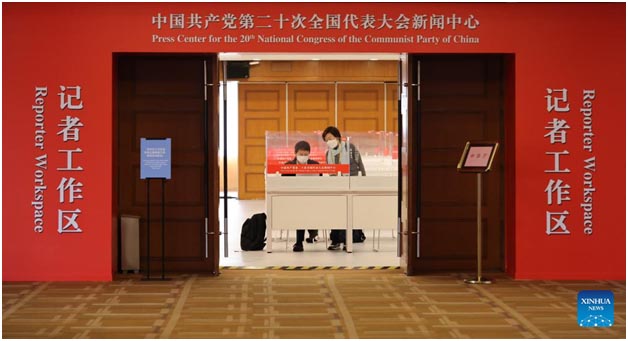 A Glance at the 20th CPC Conference Media Center

The 20th CPC Conference is open to the world and be under spotlight of media around the world.

Background: The press center for the 20th National Congress of the Communist Party of China (CPC) was officially opened on Wednesday to provide services for journalists covering the congress.

Based in the Beijing Media Center Hotel and Hotel Nikko New Century Beijing, the main functional areas of the press center was to provide journalists from home and abroad with services in various areas including media interview and data support.

They can also participate in group interviews and visiting and reporting tours in Beijing. Coordination and arrangements were made for overseas journalists to interview delegates, according to the director.

A video link interview system connected Hotel Nikko New Century Beijing with press halls of the Great Hall of the People and Beijing Media Center Hotel, as well as with video interview rooms at delegations’ hotels, said the director.

The press center will also offer accommodation and transportation services, according to the director. The press center has launched its official website and social media accounts, as well as systems for handling the registration and interview applications of overseas journalists.