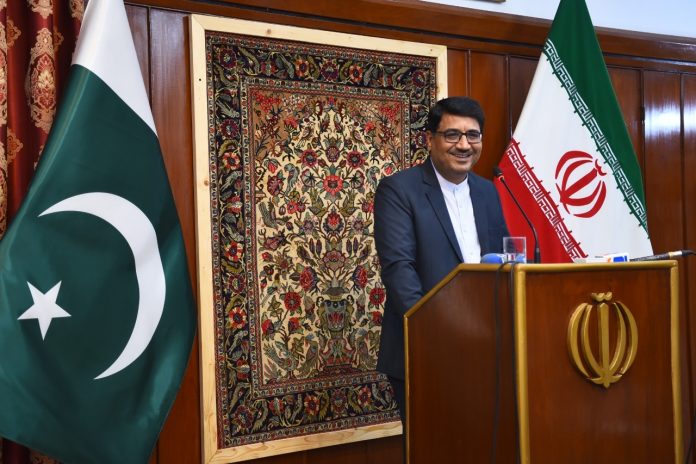 KARACHI: (www.thenewslark.com) (TNL Reporter) Iran’s Consul General Hasan Nooryan posted in Karachi has said that his country is ready to supply natural gas to Pakistan to meet Pakistan’s energy needs and in this regard, Iran has closed Pakistan’s border in its country. A 950 km long pipeline has been laid, which was signed in 2012 and under the agreement to supply 60 million cubic feet of natural gas to Pakistan for 25 years, unfortunately this agreement could not be implemented, that Friday. Khan Farhang was addressing a press conference in Iran, on this occasion the Deputy Consul General and others were also present. On a question, the consul said that in the past 1990, an agreement to lay a 2700 km gas pipeline was signed by IPI, Iran. There was an agreement between Pakistan and India, under which India was also supposed to supply 90 million cubic feet of gas, but India withdrew from this agreement and therefore it could not be implemented. will visit Abad, which will include people from different sectors and on the occasion of the visit of this delegation, two memorandums of understanding will be signed. There will be letters, he said that Iran is the third largest producer of gas in the world, he said that trade between Iran and Pakistan was 580 million dollars in the last 6 months, he said that both countries To a question, he said that Iran exports to Pakistan various machinery construction materials including food items, medicine and chocolate etc. Conspiracies are being made to divide Iran into different parts and riots were made in Iran by making the death of a girl named Mesmini an issue in Iran, while the president of Iran contacted the parents of the deceased girl and asked them to conduct a transparent investigation. Assured, a team of 19 doctors conducted an autopsy on the dead girl’s body and prepared a report after examining the death and private doctors were also included in this team. In Iran, women are not getting their rights, while the situation is the opposite, in Iran, women are equal have rights, 25 percent of women are given jobs, 1100 judges are women, 700 heads of institutions are women, 99.9 percent of women are getting education, he said that Mesmini sectarianism, racism and sexism spread. ¿ was a woman, she said that the suicide rate of women in our country is 1.3 out of 100,000 women, while in America 6% of women commit suicide in 100,000, she said that the case of Mesmini is to be thrown out. More than 1,500 articles were written in America, similarly, the number of columns written in Great Britain is more than 1,000, and 900 columns were written in Germany, and about 500 columns were printed in Italy. wants to recognize Israel, but we will not allow this to happen, he said that our country has been facing sanctions for 40 years, while for 8 years we were pushed into war, in this war, Saddam Hussein used chemical weapons. martyred our people, he said that a large number of weapons arrived in Iran to spread unrest through Daesh. But the government of Iran foiled this conspiracy with the support of the people. To a question, the Consul General said that we have good experience of facing sanctions, so if there are no sanctions, then we don’t care. He said that the United States could not achieve anything by fighting in Afghanistan for 20 years and finally had to escape from there. He said that there have been more than 6 meetings between the President of Iran, Ayatollah Raisi and the Prime Minister of Pakistan, Shehbaz Sharif, and the United Nations General A meeting was also held in the meeting of the Assembly and the Shanghai Organization. In addition, Pakistan’s Foreign Minister Bilawal Bhutto Zardari visited Iran in June.