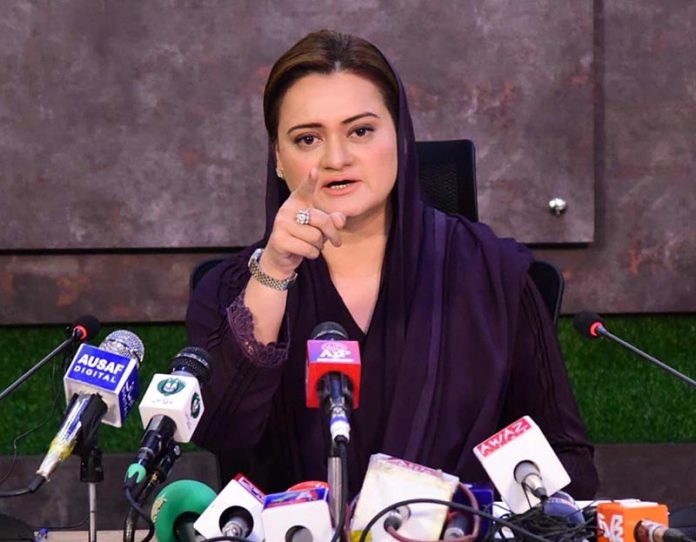 “Imran Khan says Nawaz Sharif cannot appoint the army chief in total contrast to the fact that the latter had appointed six army chiefs. Ironically, Imran Khan himself has been begging, beseeching and touching feet (of others) for one army chief’s appointment though he is not that much lucky,” she said while addressing a news conference.

Marriyum said Imran Khan could appoint the army chief only by removing the incumbent government in a constitutional way, but he did not have the required numbers for the purpose.

Nawaz Sharif was constitutionally empowered to appoint the army chiefs, while “liar and thief” Imran Khan, who had received foreign funding and traded off the national interests against diamonds and lands, was not entitled for the same, she added.

Marriyum alleged that Imran Khan launched a malicious campaign against the state institutions to achieve his ulterior motives and even did not spare the martyrs of Pakistan Army who lost their lives while assisting the people in the flood-hit areas.

He just wanted to make the army chief’s appointment controversial and for that reason, he gave mutiny calls in the rank and file of the Pakistan Army, she claimed.

She said Prime Minister Shehbaz Sharif enjoyed the majority in the National Assembly having the support of its 176 parliamentarians and he would appoint the new army chief in accordance with the law and Constitution.

The Pakistan Tehreek-e-Insaf (PTI), she said, had lost two more seats in the National Assembly after the by-election. Technically, the PTI incurred the loss of eight seats as the resignation of Imran Khan (from NA) had not yet been accepted.

The minister said the number of government’s votes had increased to 176 in the National Assembly from 172 after the by-election. Imran Khan’s threats and bullying would not work as he could only form his government by removing the incumbent one in a constitutional way, which was an impossible task, she added.

She said Imran Khan could not compete with Nawaz Sharif who had strengthened the national security, built motorways across the country, added 14,000 megawatts of electricity, increased the economic growth rate to 6 per cent and kept inflation under control during his all government tenures.

“After listening to Imran Khan’s press conference today, I am convinced that he has been suffering from the disease of ‘political Alzheimer’ as he, himself, has forgotten that it was he who remained imposed on the country for the four years,” she maintained.

The minister alleged that Imran Khan was a “foreign funded Fitna”, who had gone berserk to regain power, and bent upon creating chaos and anarchy in the country.

She reminded Imran Khan that he was rejected by the people in Multan and Karachi by-elections and had not got right to launch an assault on the Federal Capital by winning elsewhere.

The minister said that she was amazed to note that Imran Khan did not demand the resignation of chief election commissioner or malign the state institutions in today’s presser. He resorted to attack the institutions and their heads when the decisions were given against him, and remained silent on getting favourable verdicts, she added.

She said Imran Khan was blaming the current government for the country’s economic turmoil, but, in fact, it was he who had defaulted Pakistan by laundering ill-gotten money abroad through his front persons.

Imran Khan had been ruling Khyber Pakhtunkhwa for the last ten years, but he failed to build even a single university or hospital anywhere in the province, she said, adding the PTI chief inaugurated those projects in Punjab which were completed by Prime Minister Shehbaz Sharif while being the chief minister of the province.

She accused Imran Khan of taking historic loans of Rs 25,000 billion during his tenure. He did visit every country carrying a begging bowl, and even served as a driver for heads of other countries, but in vain, she added.

The minister said Imran Khan had damaged the country’s relations with friendly countries and that was all part of his plan, aimed at weakening Pakistan in exchange of the funding he received from the enemies.

Imran Khan said he would write a letter to the Human Rights Watch for highlighting the alleged torture on Senator Azam Swati, but he ironically he did not reach out to those organizations when Shehbaz Sharif, Maryam Nawaz, Shahid Khaqan Abbasi, Miftah Ismail and other PML-N leaders were illegally arrested during his government’s tenure, she stated.

The minister said Imran Khan had falsely implicated Rana Sanaullah in a drugs case, put the PML-N leaders in the death cells and even did not spare to the female members of their families.

Marriyum said the Human Rights Watch declared Imran Khan a predator for the journalists’ community as he sent Irfan Siddiqui to jail, off air the TV programmes of Hamid Mir and Talat Hussain and forced different news organizations to fire those journalists who raised voice against his tyrannies.

She said the PTI chief could only cite the name of Imran Riaz Khan for custodial torture, who was a political worker of his own party.