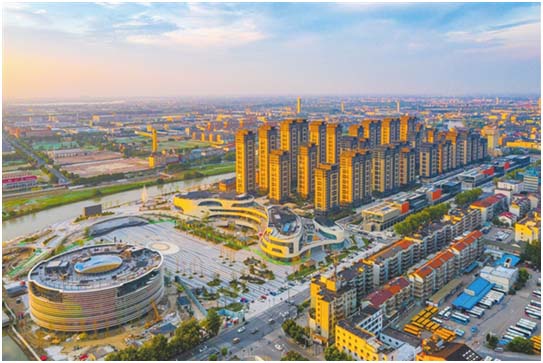 Li Xiaoping, 62, opened a smart telemedicine program at a community health service center under the guidance of a health instructor, 20 seconds later, she was connected to a doctor on the other side of the screen and started the online consultation.

Li, who suffers from high blood pressure, used to take a long time back and forth to hospitals whenever she felt uncomfortable. The online medical service brought her a whole new experience.

“I never thought that I could see a doctor on the screen, which took me only five minutes,” Li said.

Apart from the telemedicine program, an unattended gym and a home-based nursing center have also been put into use in Li’s community, which lies in Nanxun district, Huzhou, east China’s Zhejiang province.

Li’s experience is a miniature of the low-carbon lifestyles that are being widely promoted in Ditang community these days, and also a new exploration of Huzhou to make people’s life greener.

In March 2019, the provincial government of Zhejiang issued a pilot plan to build “communities of the future” that are harmonious, green and intelligent, in an effort to forge a green and low-carbon living environment.

Zheng Zhifeng, operation manager of the “communities of the future” program in Ditang community, told People’s Daily that as one of the first batch of communities where the program was piloted, Ditang has adopted low-carbon and environment-friendly approaches at the very beginning of construction.

“We want to build a carbon-neutral community, so we used as many low-carbon materials as possible for the construction work,” Zheng introduced.

According to him, a neighborhood center of Ditang community is about to be completed, and it is able to save 54.4 percent of energy consumption in general, of which the energy-saving rate of buildings reaches 39.1%.

Ditang is not the only effort made in Huzhou that advocates green and low-carbon lifestyles.

For instance, Wuxing district has set up a smart carbon-control platform that records the real-time energy consumption of local industrial enterprises. Anji county has made the once-useless moso bamboos valuable by advancing carbon sink reform.

In Changxing county, a computer is able to control a mine thanks to the development of digital green manufacturing. And in Nantaihu New Area, over 90 percent of enterprises above designated size have built green factories.

Today, green and low-carbon lifestyles are seen everywhere in Huzhou. Since 2022, the city has expanded the area of its green construction by 16 million square meters and all of the newly constructed buildings are built in accordance with green standards.

Forty-two “communities of the future” programs have been launched in the city, and more than 470,000 families are implementing waste sorting based on regular schedules, with 94.6 percent of public participation and 98.8 percent of support.

Besides, the 2022 China Green Low-Carbon Innovation Conference was recently held in Huzhou, offering green Chinese schemes for the sustainable development of the world.