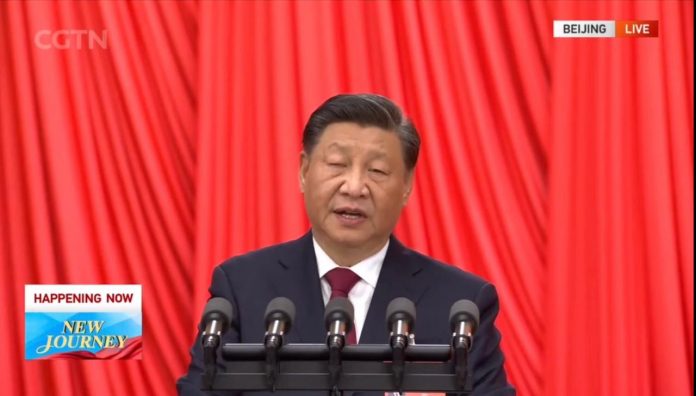 The 20th National Congress of the Communist Party of China (CPC) opened on Sunday morning at the Great Hall of the People in Beijing.

Xi Jinping delivered a report to the congress on behalf of the 19th CPC Central Committee. The following are some highlights of the report.

The theme of the congress is holding high the great banner of socialism with Chinese characteristics, fully implementing the Thought on Socialism with Chinese Characteristics for a New Era, carrying forward the great founding spirit of the Party, staying confident and building strength, upholding fundamental principles and breaking new ground, forging ahead with enterprise and fortitude, and striving in unity to build a modern socialist country in all respects and advance the great rejuvenation of the Chinese nation on all fronts, Xi said in the report.

The past decade marked three major events of great immediate importance and profound historical significance for the cause of the Party and the people, Xi said.

“We embraced the centenary of the Communist Party of China, we ushered in a new era of socialism with Chinese characteristics, and we eradicated absolute poverty and finished building a moderately prosperous society in all respects, thus completing the First Centenary Goal.”

China has seen a historic rise in its economic strength in the past decade, Xi said.

China’s GDP has grown to 114 trillion yuan (about $16 trillion) from 54 trillion yuan in the past decade and come to account for 18.5 percent of the world economy, up 7.2 percentage points, he said.

“From this day forward, the central task of the CPC will be to lead the Chinese people of all ethnic groups in a concerted effort to realize the Second Centenary Goal of building China into a great modern socialist country in all respects and to advance the rejuvenation of the Chinese nation on all fronts through a Chinese path to modernization,” Xi said as he expounded on the missions and tasks of the CPC on the new journey of the new era.

The CPC aims to basically realize socialist modernization from 2020 through 2035 and build China into a great modern socialist country that is prosperous, strong, democratic, culturally advanced, harmonious and beautiful from 2035 through the middle of this century.

Xi pledged to improve the people’s well-being and quality of life.

“This country is its people; the people are the country. As the CPC has led the people in fighting to establish and develop the People’s Republic, it has really been fighting for their support,” he said.

China will improve the system of income distribution. “We will ensure more pay for more work and encourage people to achieve prosperity through hard work,” Xi said. “We will promote equality of opportunity, increase the incomes of low-income earners and expand the size of the middle-income group.”

China will do more to help those in difficulty find employment and meet their basic needs, and improve the social security system with expanded coverage of social insurance programs, he said.

Xi said that the CPC will implement its overall policy for resolving the Taiwan question in the new era and unswervingly advance the cause of national reunification.

“Resolving the Taiwan question is a matter for the Chinese, a matter that must be resolved by the Chinese,” said Xi.

“We will continue to strive for peaceful reunification with the greatest sincerity and the utmost effort, but we will never promise to renounce the use of force, and we reserve the option of taking all measures necessary. This is directed solely at interference by outside forces and the few separatists seeking ‘Taiwan independence’ and their separatist activities; it is by no means targeted at our Taiwan compatriots,” he said.