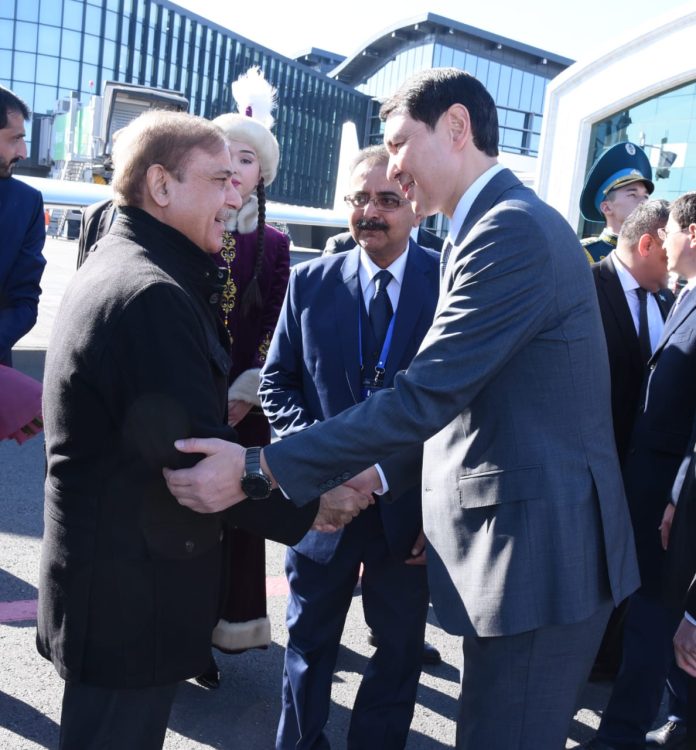 ASTANA : Prime Minister Shehbaz Sharif arrived in Kazakhstan’s capital Astana to participate in the 6th Summit of the Conference on Interaction and Confidence Building Measures in Asia (CICA), being held on 12-13 October.

The prime minister was accompanied by members of the cabinet and senior officials.

During his stay in Astana, PM Sharif will meet the President of Azerbaijan, Ilham Aliyev, and also attend the banquet hosted by President of Kazakhstan, Kassym-Jomart Tokayev in honour of leaders of the CICA member states.

The prime minister will address the plenary meeting of CICA on October 13, where he will elaborate upon the significance of CICA as a unique forum for promoting interaction, understanding, and collaboration amongst countries across Asia to address common challenges.

He will also highlight Pakistan’s perspective on regional and global issues.

On the sidelines of the summit, the prime minister will hold bilateral meetings with the leaders of various CICA member States aimed at fostering greater cooperation, particularly in the fields of trade, and investment.

Prior to his departure from Nur Khan Airbase this morning, PM Sharif in a tweet stressed a greater need to promote engagement and understanding to form win-win partnerships among the countries in Asia.

“I believe CICA is capable of shaping a new configuration of economic cooperation and security in Asia through greater connectivity,” he said.

Earlier, the Foreign Office in a statement said, ”The Prime Minister’s participation in the CICA Summit attests to the importance attached by Pakistan to promoting connectivity and economic cooperation in Asia, in keeping with the objectives enshrined in the CICA Charter.”

CICA is an intergovernmental process comprising 27 countries from all across Asia.

Established in 1992, it focuses on promoting peace, security, and socio-economic development in the Asian continent. Pakistan is one of its founding members.

CICA offers an invaluable platform for advancing the objectives of regional stability and prosperity through dialogue and win-win cooperation.