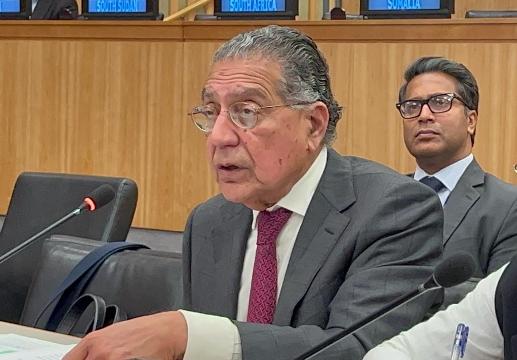 UNITED NATIONS: Pakistan has urged the international community to urgently promote “concerted and coordinated” actions to deal with the multiple crises triggered by the coronavirus pandemic, geopolitical tensions and climate catastrophe that have pushed around 100 million people around the world into extreme poverty.Poverty imposes massive human suffering, and the root cause of social and economic instability and of most political and security problems across the world, Ambassador Munir Akram told a joint meeting of the General Assembly’s Second Committee (Economic and Social) and the Economic and Social Council (ECOSOC), the economic arm of the United Nations.Over the past 30 years, the Pakistani envoy said, poverty had visibly declined, but the pandemic erased the progress.

“Rising inflation and impacts of geopolitical tensions have further derailed the process,” he said in a debate on ‘New perspectives on poverty eradication.”

Ambassador Akram said that human actions are the cause of perpetuating and raising global poverty, noting that 26 richest people in the world own as much wealth as half the world’s population does.

“Ironically,” he said, “the countries that have contributed the least towards climate degradation are suffering the most from climate change related poverty.”

Confronted with the scale of the human crisis, Ambassador Akram said that governments all over the world compelled to provide relief to their poor and vulnerable people in the form of social protection measures, particularly direct cash transfers, and pointed out that an estimated 3,333 social protection measures were planned and implemented in various countries during the Pandemic.

“The upsurge in food and energy prices requires massive and swift financial and logistical support and investments in social protection measures,” he said, adding that “the international community needs to promote a series of concerted and coordinated actions to address the food crisis building on the resolution 76/264 entitled ‘State of Global Food Insecurity’.”

That resolution calls on the international community to urgently support countries affected by the food security crisis through coordinated action.

Food producers, especially smallholders in developing countries, he said, must be provided adequate access to seeds, fertilizer and finance to contribute to expanding in local and national food production.

The world, he said, needs to promote sustained, inclusive and sustainable economic growth, full and productive employment and decent work for all.

“Conflicts are on the rise, so is forced displacement, exacerbating socio-economic and environmental vulnerabilities,” the Pakistan envoy said, while stressing the need to make structures of finance, production, and trade “fair and equitable”.

“Poorer countries must get their fair share in global development that they have been requesting since long,” he said, emphasizing that developing countries must be helped to recover from the current crises to realize the SDGs and to ward off the impacts of climate change.

“The financial resources needed by the developing countries must be mobilized, through sound debt management, rechanneling of unutilized SDRs, issuance of additional SDRs, and by expanding grants and concessional finance, particularly for the countries in extreme financial difficulties and/or suffering from natural and human-made disasters.

“The realization of the SDGs can be accelerated, especially through major investments in sustainable infrastructure – in renewable energy, transport, housing, education, water and sanitation.” Ambassador Akram added.

“New technologies must be mobilized, and the digital divide bridged to enable developing countries to leapfrog into a modern and inclusive development paradigm.”

The joint meeting then held a panel moderated by Professor Sakiko Fukuda-Parr, member of the United Nations Committee for Development Policy and Professor of International Affairs at the New School in New York, and featuring: Adil Najam, a Pakistani Professor and Dean Emeritus of the Frederick S. Pardee School of Global Studies at Boston University; Professor Robert Walker, of the China Academy of Social Management, School of Sociology, at Beijing Normal University and Professor Emeritus and Emeritus Fellow of Green Templeton College at the University of Oxford; Maryann Broxton, Co-director of the Multidimensional Aspects of Poverty Research Project at ATD Fourth World; and Under-Secretary-General Fatima.

In his remarks, Prof. Najam said that climate impacts and adaptation have already become a reality for at least 2.5 billion people in the world.

Referring to the recent floods in Pakistan, fires in Australia and heatwaves in Europe, he pointed out that “climate has moved to a place where we don’t know what will happen”.

Climate change, Prof Najam said, has altered the fundamental structure of poverty, which in turn has necessitated a focus on the idea of climate inequity.

Referring to a recent calculation by the World Bank that recovery from the floods in Pakistan will cost $42 billion, he said that the poorest people will pay the cost because it is “unlikely” that the developed countries’ pledges to commit $100 billion will be provided.

On specific impacts of climate change, Prof. Najam pointed out that most of them will be concerning water, such as sea level rise, melting glaciers and drought.

Outlining several proposals to the Committee, he stated that there is a need to move from thinking about climate as mostly about energy and emissions to considering it in terms of development. He also stressed the need to move from climate incrementalism, where each stakeholder does what it can and hopes that they add up in total, to an idea of climate justice.

“While noting that adaptation provides an opportunity for better sustainable development, he also emphasized the importance of moving from “disaster and relief” to “development and resilience”.