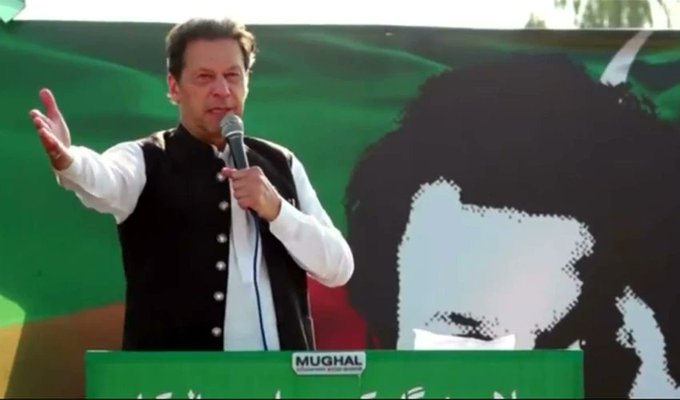 MIANWALI: PTI Chairman Imran Khan claimed Friday that four people were planning to assassinate him, and if something happens to him, he would release their names.

“The tape, which includes the names of four people, will be released if something happens to me,” the former prime minister — who is embroiled in the recent audio leaks controversy — said while addressing a jalsa in Mianwali.

This is not the first time that the PTI chairman has claimed that his life is under threat, as after his ouster from the Prime Minister’s Office, Khan and his party’s leaders have time and again stated that plans were being hatched to assassinate him.

In light of the threats to him, Prime Minister Shehbaz Sharif had also ordered to beef up the security given to his predecessor, following which nearly 100 police personnel were provided to keep Khan safe.

Without providing the names of the people planning to have him killed, Khan told today’s jalsa that if he were to be assassinated, then the people behind the plot will claim that a “religious fanatic has killed me”.

“The people making plans against me will fail,” the PTI chairman said, who has been at loggerheads with the incumbent government and plans to hold a long march seeking to oust the rulers from office.

Hinting that his party workers and leaders would not heed the government’s threats of putting them behind bars and thwarting his “Azadi March”, Khan said: “We are planning to start a ‘fill the jail campaign’.”

The PTI chairman added that the incumbent rulers were appointing their “own people” to the Federal Investigation Agency (FIA) and the National Accountability Bureau (NAB).

Providing the reason behind the appointments, the former prime minister said that the rulers wanted to have their corruption cases disposed of.

Khan added that since the government was “facing defeat” at every front, it was leaking “fake” audios.

The audio leaks saga has been making the headlines in recent days and they are not only restricted to Khan’s PTI, but soundbites of government officials — including Prime Minister Shehbaz Sharif — have also been leaked.