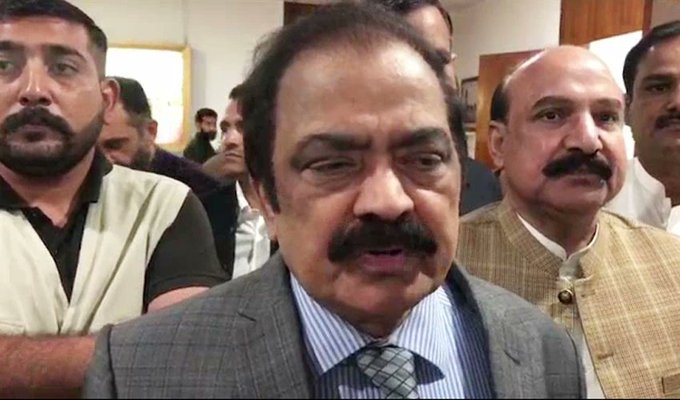 Senator Saifullah had not been appearing for investigation in the foreign funding case and now he had been taken into protective custody so that he could be formally questioned, he said while addressing a press conference.

The minister said the legal procedure would be followed for the arrest of PTI senator if required at a later stage.

He said PTI leader Hamid Zaman had been also taken into protective custody in the party’s foreign funding case.

Rana Sanaullah said PTI chief Imran Khan was misleading the nation as his narrative of conspiracy had been debunked.
His ‘real face’ was now fully exposed and the nation should treat him as `fitna’ (anarchist), he added.

Imran Khan’s fake narrative of conspiracy had damaged Pakistan’s relations with foreign countries, he said. The PTI chief was trying to get back in power by using every tactic, he added.

He said the country suffered an irreparable loss during the PTI government. Besides destroying the national economy and political culture, the the Imran Khan led regime isolated Pakistan at the international level, he added.

The minister played the audio of Imran Khan leaked earlier in the day on the social media, which, he said, revealed that he (Imran Khan) was involved in horse-trading.

The minister said the government would take all possible measures to maintain law and order in Islamabad. They had a plan in place to counter any march towards the capital city. No pressure group would be allowed to besiege Islamabad, he resolved.

He said Imran Khan had polarized the society, by ruining its basic values and norms. He was bent upon dividing the nation, which should better get rid of “such a liar person”.