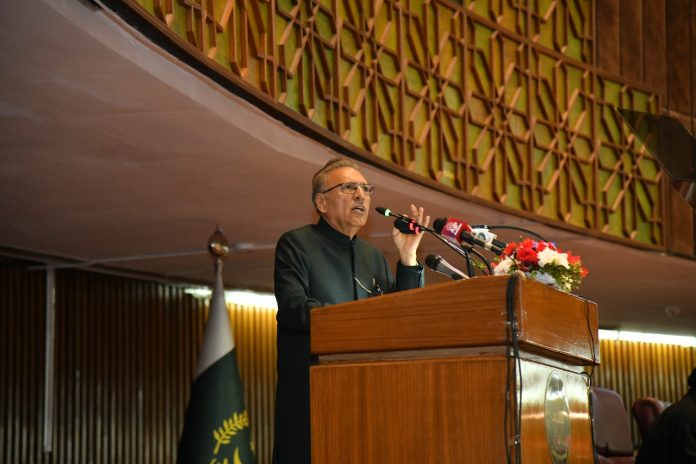 ISLAMABAD: President Dr Arif Alvi Thursday, in an annual address to the Parliament, suggested a range of measures to the legislators to bring about improvement in lives of people by reforming multiple sectors including economy, education, health and agriculture.

During the joint session of Parliament, the President commenced the speech by referring to the massive devastation caused by super floods during current year monsoon season.
He said the floods caused immense problems for Pakistan and its economy. He felicitated the Armed Forces for rescuing and saving lives of the people stranded in the floods. He also lauded the federal and provincial governments, disaster management authorities, non-governmental organizations and philanthropists for effective rescue and relief efforts and urgent distribution of financial assistance.
Chairman Senate Sadiq Sanjrani and Speaker National Assembly Raja Pervaiz Ashraf chaired the session which marked the beginning of the fifth parliamentary year.

The President said more than 1500 people lost their lives and houses, buildings and infrastructure were destroyed in the flash floods.
Pakistan was emitting less than one percent of the global carbon emissions but facing severe issues due to climate change and global warming, he remarked.

He thanked the United Nations Secretary General Antonio Guterres for visiting the flood-afflicted areas and meeting the flood affectees.

He thanked the United Nations Secretary-General Antonio Guterres for visiting the flood-afflicted areas and meeting the flood affectees.

He lauded the United Nations for launching the flash appeal of $ 160 million in August and later another appeal of $ 816 million besides delivering aid to the flood victims in a coordinated manner.
He said it was time to prepare youth so that they could deliver medical assistance and other essential aid during emergencies and natural disasters.