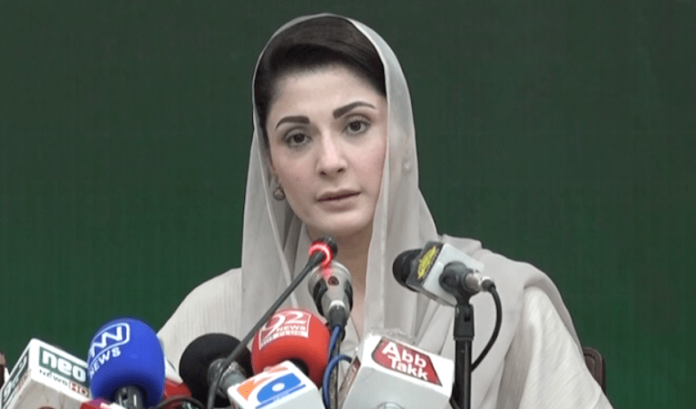 LAHORE:Vice President Pakistan Muslim League Nawaz (PML-N) Maryam Nawaz on Tuesday said that she along with her father Nawaz Sharif had been facing cases initiated against them after Panama Papers for six years but not a single evidence could be presented against them.

Addressing a press conference at Model Town, Maryam Nawaz said that she had finally got her passport back from the Lahore High Court after a period of three years however there was no any case registered against her for which her passport was taken into custody.

Maryam said she was arrested for investigation and was kept in illegal detention by the National Accountability Bureau for 57 days and was later shifted to Lot Lakhpat Jail on judicial custody where she was kept for around one and a half month. Maryam said that she did not take any immunity of being a woman and faced the cases against her by appearing in courts regularly and spending time in NAB detention.

Maryam Nawaz said that she had been appearing before the courts in Panama Papers case where not a single evidence was presented against her by the prosecution and she had been vindicated as nothing could be proved against her and father Nawaz Sharif.
She said that baseless cases were initiated against her and Nawaz Sharif to oust them from the political field. Maryam Nawaz said that she had instructed her lawyers that she did not want to take any relief or benefit from NAB amendments and would contest her case on previous NAB laws.

Maryam Nawaz said that baseless statements were being uttered by Pakistan Tehreek-e-Insaf chief Imran Khan regarding return of Finance Minister Ishaq Dar, saying that it was very unfortunate that everything was attributed to be a deal. She regretted that the PTI leadership had introduced very bad traditions in country’s politics by using abusive remarks for political opponents.

She commented that Bani Gala was worried that why country’s economy was recovering and Pakistani rupee was getting stable and Ishaq Dar’s return would further improve economic situation of the country as Finance Minister Ishaq Dar had a track record of bringing the country’s economy out of crisis.

Maryam Nawaz said the PTI chief was real master of giving ‘NRO’ to his favoured persons like Farah Gogi which had been given clean chit in corruption cases in Punjab and was sent abroad through a chartered plane.

Maryam Nawaz said that PTI chief Imran Khan only knew to give lecture on giving respect to women but practically he did not know how to give respect because action against her was actually taken on the direction of Imran Khan.

PTI chief’s threatening remarks against an honourable woman judge was a self evidence that he did not have any respect for others particularly for women, she added.

Maryam Nawaz said that firstly, the content of cipher was changed and then a conspiracy was hatched by the PTI leadership on the basis of cipher to use it for their personal objective.

During a recent interview PTI chief was asked about whereabouts of cipher and Imran Khan responded that he might had lost. Cipher was an important diplomatic document but the way the previous government had treated it was a worst example of non serious attitude, she added.

She said that the PTI chief had gone blind in the lust of getting power somehow that he had started criticizing national institutions. A malicious campaign was launched by the PTI social media groups against the state institutions.

Maryam Nawaz said that public funds of the KPK government were being used on PTI chief whereas infrastructure of the entire province was in need of attention of the government.

To a question, Maryam Nawaz said that she would be travelling to London to meet her father and brothers there.

To another query, she said that the PML-N was an experienced political party which had roots in the people and wanted level playing field as it was its right like any other political party.

She said that the PML-N believed in supremacy of the law and constitution and Nawaz Sharif had stressed that all institutions should work within domain. Contrary to it, she maintained that PTI had been creating divisions among the institutions and tried to make them controversial for personal gains.