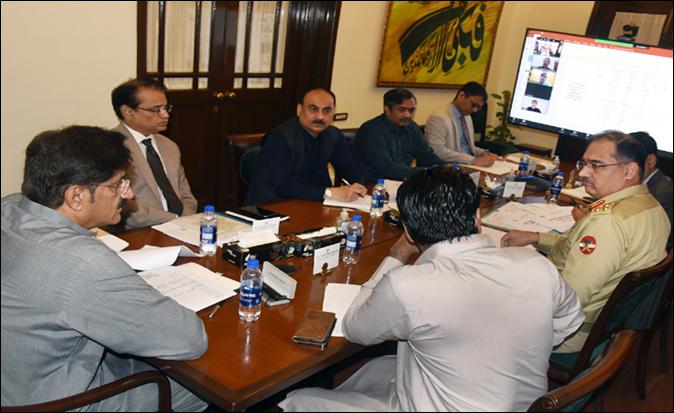 KARACHI: Sindh Chief Minister Syed Murad Ali Shah presiding over a meeting on the disposal of flood/rainwater from cities, towns, and agricultural lands has directed the Irrigation department to ensure the evacuation of water by the end of October so that displaced people could be sent back to their homes and lands could be prepared for sowing early and late varieties of Rabi crop. “I am working day and night to ensure sowing of Rabi crops, particularly the wheat to avoid a famine-like situation next year for which everyone in the agriculture and irrigation departments has to be my helping hand,” he said.  The meeting was attended by irrigation Minister Jam Khan Shoro, Chief Secretary Sohail Rajput, Brigadier Nayar of Engineering Corps Corps-5, Secretary to CM Rahim Shaikh, Chief Engineer Irrigation Jamal, DG PDMA Salman Shah, and former chief engineer Zahid Shaikh. Those who attended the meeting through video link include, Chief Engineer Development-II Zarif Khero, MD SIDA Pritam Das, and Chief Engineer Sukkur Sardar Shah. River Flood situation: Minister Irrigation Jam Khan Shoro briefing the chief minister said that River Indus was flowing normally at Guddu, Sukkur, and Kotri Barrages. He added that Manchhar Lake has also shown a reduction of water by 5.95 feet, from R.L 123.30 R.L to 117.35 R.L. Similarly, the level at Dadu-Moro Bridge has come down from RL-130.40 to R.L 119.40 that showed a reduction of 11 feet. Mr. Shoro said that the water level has reduced along FP Bund ranging from 8.5 ft to 11.5 ft in the upper reach of Saifullah and Rice Canal Division, whereas 5 to 8 ft in the lower reach of Southern Dadu Division. He added that the water level along Suprio has also reduced about 6 to 7 ft. Reduction along MNV at RD-194 is about 4.2 ft, at RD 210 is about 3.5 ft and at RD-346 is about 11.4 ft. The water level has reduced from 5.85 feet to 2 feet along KN Shah to Dadu Road.Talking about the current situation of inundation on the right side of the Sukkur barrage, the minister of irrigation told the CM that the reduction at Johi Branch, RD-67 (KN Shah Dadu Road) has been recorded at 6.2 ft. The breach at FP Bund at RD-169 (Chukhi) and the breach of 600 feet at RD-224 IP Side Saifullah Magsi Branch have been plugged. He added that closing work of cut at Manchhar Lake RD-14 is in progress.LBOD: During the online discussion, Mr. Zarif Iqbal khero, Chief engineer Development-II told the chief minister that water was receding from LBOD Spinal smoothly at about 1-2 decimals a day which would increase as time passed. He further said that the speedy evacuation was taking place in Sanghar district as well as in Mirpurkhas apart from Taluka Jhudo which was dependent on further reduction in the Spinal drain at RD 295.