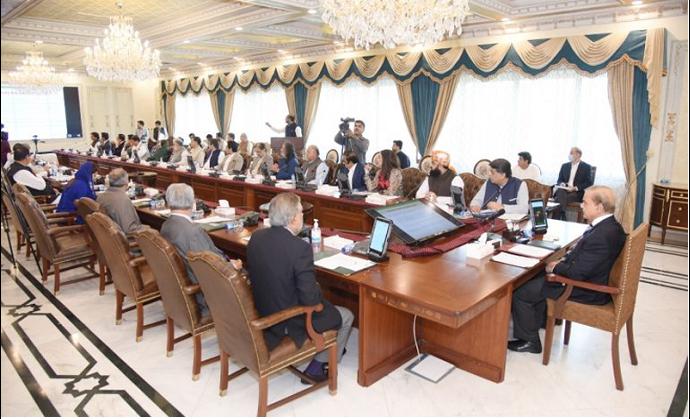 ISLAMABAD: The federal cabinet on Friday held detailed deliberations on the issue of audio-leaks and endorsed the decision of National Security Committee (NSC) to investigate the matter thoroughly. The federal cabinet meeting, held here with Prime Minister Muhammad Shehbaz Sharif in chair, however, expressed its strong concern over the fact that continuous surfacing of the audios of former PM, ex-Principal Secretary to PM and other people about the diplomatic cypher had exposed the criminal conspiracy of the previous government and former Prime Minister Imran Niazi, a press release issued by the PM Media Wing here said. The meeting noted that vital national interests were damaged by giving concocted meaning to a diplomatic cypher for political gains and it [the cypher] was stolen after “fraud, forgery and fabrication”. It was strong violation of the constitutional oath, other related laws and regulations particularly the official secret. It was the act of unpardonable crimes against the state through which political interests were given priority over the vital national interests. Therefore, it was necessary under the constitution, law and rules to investigate the issue in detail and those found responsible be given severe punishment in accordance with the law. The cabinet was given a briefing on the issue of diplomatic cypher, during which it was revealed that the copy of diplomatic cypher in question was missing from the PM House Record.The meeting was told that though entry of the receipt of cypher sent to former prime minister was found in the record, but its copy, which is considered as the property of PM House as per law, was missing from the record. The meeting, which termed the stealing of diplomatic cypher from the record as a serious matter, after detailed consultation constituted a special Cabinet Committee, which will determine legal action against all the involved characters including the former prime minister, ex-Principal Secretary to PM and senior former ministers. Besides the representatives of the government’s allied parties, the Cabinet Committee will comprise the Ministers for Foreign Affairs, Interior and the Law and Justice.