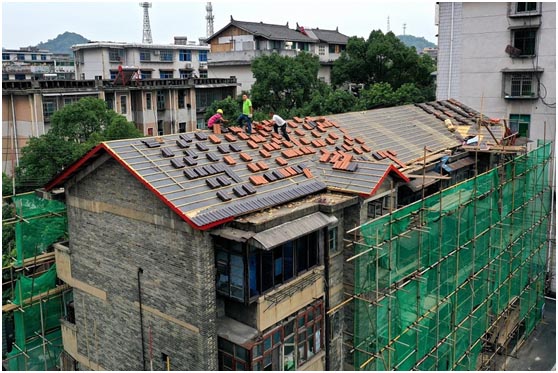 Every weekend, Pei Yiting from Taiyuan, north China’s Shanxi province, goes cycling along a bike lane on the bank of the Fenhe River that drains the center of the province. The bike lane is surrounded by wetlands where large numbers of water birds inhabit.

The riverside bike lane, extending all the way from Taiyuan’s north part to its south part, is an outcome of “urban check-up,” a comprehensive urban evaluation system that aims at optimizing urban development, strengthening urban construction and balancing rapidly swelling populations and scarce urban resources through targeted measures.

According to Han Ran, an official with Taiyuan’s municipal housing and urban-rural development bureau, many citizens demanded a riverside bike lane along the Fenhe River during Taiyuan’s 2020 “urban check-up.” In May 2021, the bike lane was put into use, and it formed a complete urban bicycle transport system with other operational bike lanes in the city, which has significantly facilitated nearby residents and made surrounding areas more energetic.

“At present, China’s urbanization rate of permanent residence stands at 64.72 percent, with an obviously slowing speed of urban space expansion. It has resulted in an imbalance between the growing urban population and scarce urban resources,” said Pan Fang, vice president of Tsinghua Tongheng Urban Planning and Design Institute. There’s an urgent need to improve the living environment, she said.

In 2018, Beijing became the first Chinese city to launch an “urban check-up” under the guidance of the Ministry of Housing and Urban-Rural Development, and the comprehensive urban evaluation system was piloted in 11 cities a year later, including Shenyang, Nanjing and Xiamen.

It was promoted in 36 cities in 2020 and the scope was further expanded to 59 last year, which covers all municipalities, cities under separate state planning, and provincial capitals, as well as parts of the cities with subordinate districts.

This year, the number of items on the check-up list has increased from 65 to 69 on eight aspects. The ratio of prefabricated structures in all newly built constructions, as well as the reutilization of construction waste are included in the 2022 list.

Social satisfaction surveying is one of the methods adopted by “urban check-up.” Through questionnaires and field visits, it studies people’s satisfaction with urban construction performance and searches for prominent problems and weaknesses.

Pan told People’s Daily that the third-party check-up includes a series of procedures such as data collection, index calculation and the making of evaluation standards. According to her, data is acquired and analyzed by Python programs, geographic information systems, remote sensing and the internet of things. Besides, a data sampling system was also established, she said. For instance, map apps are employed to estimate the coverage of restaurants for seniors and affordable kindergartens to see whether the supply of relevant infrastructure is at a reasonable level.

At present, China is building an “urban check-up” system featuring an annual examination and a quinquennial evaluation, aiming to find solutions to livelihood issues and strengthen urban development.

Based on the results of the “urban check-up,” the Ministry of Housing and Urban-Rural Development will work to discover common problems facing Chinese cities, learn from local experiences and make state policies, so as to comprehensively improve urban planning, construction and management.