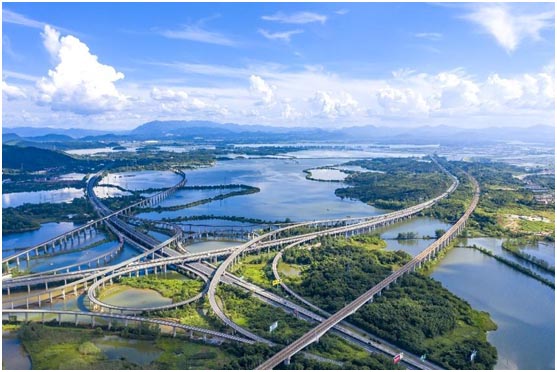 Star trails are a type of photograph that uses long exposure times to capture the motion of stars in the night sky. In Beijing, star trail photographs could be captured only in suburban areas in the old days. But recently, photographers recorded them in the Shougang Park, which sits in the Beijing city. This indicates continuous improvement in Beijing’s air quality.

For instance, the Chinese capital saw 288 days of good air quality last year, or 78.9 percent of the calendar year, up by112 days from 2013. The total number of heavily-polluted days in the city had been slashed by 50 to eight during the same period.

Such drastic change mirrors the remarkable achievements made by China in the past 10 years in terms of ecological progress.

A sound ecological environment is the fairest public product and the most inclusive benefits to people’s wellbeing.

In southwest China’s Guizhou province, over 98 percent of the days in key cities are of good air quality, and good water quality is monitored at all exit cross-sections of major rivers.

Hebei province, located in the northern part of the country, has reduced 5.23 billion cubic meters of groundwater overdraft, restored 400,000 mu (26,667 hectares) of mines and recovered 2.7 million mu of degraded, desertified and salinized grasslands.

In Jiangsu province, 93.6 percent of residents said the environment was satisfactory.

Over the past 10 years, China has seen bluer skies, greener mountains, clearer waters and better environment. The Chinese people’s sense of fulfillment, happiness and security has been constantly improved.

Over the past 10 years, China’s ecological environment has gone through a historic change. In this period, the country contributed to around a quarter of the world’s afforestation area, and the carbon dioxide emission per unit of GDP dropped about 34 percent. Besides, China has built the world’s largest renewable energy capacity and become the world’s largest producer and seller of new energy vehicles.

China’s national carbon market has started online trading, and the country has established an ecological compensation system for the Yellow River and Yangtze River basins, said Ye Min, deputy head of the Ministry of Ecology and Environment.

According to Ye, outstanding green loans in yuan and foreign currencies reached 15.9 trillion yuan (about $2.31 trillion) by the end of 2021.

Over the past 10 years, China has enacted multiple laws and regulations on environmental protection and launched a central inspection system for ecological and environmental protection. It has established a protected areas framework with a focus on national parks and made continuous and huge afforestation efforts. It has formulated and introduced measures for assessing progress made in ecological improvement and implemented a river, lake and forest chief system.

The riverside region stretching along the Huangpu River in Yangpu district of Shanghai has turned from an “industrial rust belt” into a vibrant urban public space for leisure; a mining area in northwest China’s Ningxia Hui autonomous region, upon ecological restoration, has become a “wine chateau” that generates huge economic benefits; a village in Dali Bai autonomous prefecture, southwest China’s Yunnan province has regained its natural beauty after stopping all farming activities at its lakeside ponds and farmlands, attracting more and more tourists.

These facts prove that to protect environment is to protect and increase the value of the nature, as well as the potential of economic and social development.

In May the last year, the first batch of forest carbon credit stamps were issued. One of the stamps, permitting 12,723 tons of carbon dioxide, was generated from approximately 213 hectares of public forest in Changkou village, Jiangle county of Fujian province, and it has guaranteed the village additional earnings of 140,000 yuan through carbon trading.

China, apart from building a beautiful country itself, is also an important participant, contributor and trailblazer in global ecological conservation.

The country has promised to scale up its Intended Nationally Determined Contributions by adopting more vigorous policies and measures. It aims to have CO2 emissions peak before 2030 and achieve carbon neutrality before 2060.

It has added the targets of carbon peak and carbon neutrality to its overall plan for ecological conservation, and is accelerating new energy development, to make low-carbon production and lifestyles a common pursuit of the Chinese society.

Today, the country is making important steps toward the initiative of “building a beautiful China,” driving weeping, historic, and transformative changes in its ecological conservation.

More and more Chinese people are taking actions to spread ecological awareness and put the awareness into practice, with an aim to leave the blue skies, lush mountains and lucid waters for future generations.