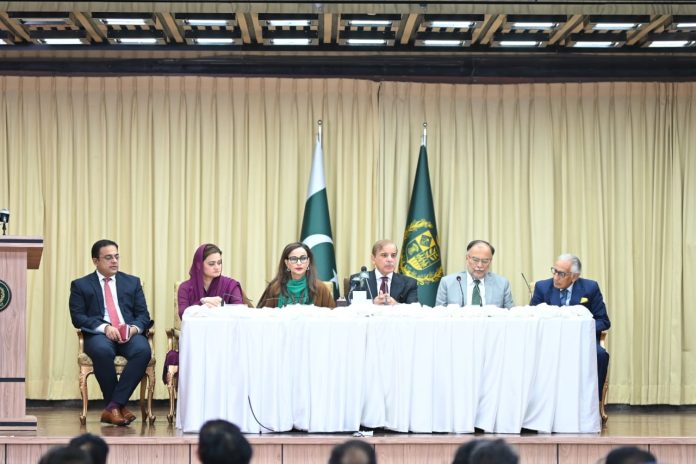 ISLAMABAD: Prime Minister Muhammad Shehbaz Sharif on Tuesday while terming the purported surfacing of an audio leak of the Prime Minister House as a ‘serious security lapse’, resolved that it would be thoroughly investigated.

Addressing a presser, the prime minister agreed that a big question mark was posed over the audio leak and informed that he was taking a notice and would be forming a high-powered committee to fully probe it and unearth facts.

The prime minister further said that visitors from the foreign countries would also feel uncomfortable if the conversations were bugged in the official places and such breaches of cyber secrecy were related to matter of respect of 220 million Pakistanis.

To a query, the prime minister said that the country was passing through ‘a state of war on the economic front’ and the coalition government was fully endeavoring to set the national economy right.

“Rest assure, we will not run away and will put it on the right path,” he emphasized.

The prime minister said that the coalition government had focused on the economic situation and striving day and night to improve the economic conditions, therefore, they had no time for setting the political scores with Pakistan Tehreek-i-Insaf chief Imran Khan.

If he had spent half of the time of his government on strengthening the economy, there might be some improvement, he regretted without naming Imran Khan.

The prime minister responding to another query categorically said that the general elections would be held on time and ruled out any threats to the coalition government.

Explaining further, the prime minister said in the alleged audio leak, Marriyum Nawaz, had never asked for any favour, neither she sought any favour nor recommended anything for her son in law.

Half of the sugar mills machinery was imported from India during the PTI’s government, he said, adding since the matter pertained to India, they did not consider it and took up in the cabinet.

Under the laws, as a prime minister, he could give a nod, but he did not, so what was wrong in it, since no bargaining was involved, he added.

The prime minister, in an apparent reference to PTI’s audio leaks, said whey questions were not raised over those audio leaks which provided clear evidences of bribing of diamonds and properties given in exchange for the transfer of 190million UK pounds which were sent back as settlement after investigation by the UK National Crime Agency.

To another question, the prime minister said Imran Niazi had misused the national machinery with use of brute force by framing fake cases against Nawaz Sharif and other leadership of PPP and PML-N, even the women were not spared.

It was on record that Bashir Memon, former chief of FIA, was summoned to file fake cases against the political adversaries of PTI. His statements in this regard were on the record, he added.

“If I err somewhere, I shall ask for forgiveness from the nation,” the prime minister maintained.

Further elaborating his point of view, the prime minister said during the PTI tenure, the national assets were sold mercilessly and Tosha Khana was an example in this regard as watches were sold out and the amount was taken away by Imran Khan.

Khan sab sold out watches and after fetching the amount, the required percentage of the Tosha Khana gifts were deposited which blatantly violated the set norms and requirements, he added.

The PTI’s government provided subsidy over sugar at a time when the US dollar was on the surge and rupee was tumbling down so it provided ‘a windfall’, manifesting billions of rupees scam.

Contrary to Imran Khan’s claims of bringing the elements to books did not yield any results, the prime minister said and questioned where had been the commission that was promised to probe such corruption? How many people were proceeded against and taken to jails?

The NAB chairman was blackmailed through a female complainant who was unlawfully kept in confinement in the PM house, he added.

In the leaked audio leak whether anyone heard of any bargaining. If there was any wrongdoing ask him and he would respond, the prime minister said, adding “Please don’t make a mountain out of a molehill. It is not suitable.”

The prime minister said the PTI government had taken a case against him with the UK NCA which gave him a clean chit after investigation, while contrary to it, Imran Niazi had misused the donation money of the hospital for his political purposes.

Summoning up his experience with the PTI leader, the prime minister said that he had never come across such a liar, corrupt and ungrateful person in his life.

The prime minister said billions of rupees were embezzled in Peshawar Metro bus project and similar was the fate with billion trees tsunami.

He said he could not sleep out of the fears that the country could be defaulted due to the economic straits in which the PTI government had left the country.

Further, they were tied with the tough conditions of the International Monetary Fund (IMF), he said, adding that on the sidelines of United Nations General Assembly session in New York, he held a meeting with the IMF MD about the flood and economic situation of Pakistan.

To a question, the prime minister straightaway rubbished PTI’s leadership allegations over imported government and said that his cordial meeting with Russian President Putin was suffice to deflate such hollow claims.

The Russian president had asked for export of wheat and oil to Pakistan, he added.

Moreover, the Supreme Court and the National Security Committee had not found any clue of any connivance of the politicians with the foreign governments to dislodge PTI’s government, he said, adding that through a constitutional and democratic manner, the previous government was shown the door through use of vote of no-confidence motion.

Despite use of all the available machinery, the PTI leadership, till this date could never prove a single case against the political leadership of their opponents through false cases, he said, referring to acquittal of Ahsan Iqbal from a NAB case.

The prime minister said that they would respect the public mandate in the general elections but advised the people to consider the fact that a person (Imran Khan) was telling lies on daily basis.

The closed envelop of 190 million UK pound case was approved in the PTI’s cabinet without opening it, he added.

The prime minister said PTI’s leadership was spewing venom in the society and expressed his fear at the widening gap of polarization in the society.

In this tug of political war, this person (IK) could take the country to a destructive path, he said and alluded to the recent ugly incident against Marriyum Aurangzeb in the UK. “What will become of the country, that’s is the real issue,” he stressed.

To another question, the prime minister said, he was thrice elected as Khadim-e-Aala (chief minister of Punjab), with the support of Nawaz Sharif and he bore all the expenses of his official visits, from his personal sources during the last 20-25 years.

Being a prime minister, it was not a new thing, he said, if Allah Almighty had blessed him with such a status, he would never spend the public money.

“If Allah has bestowed me with such a high status why would I spend the public money,” the prime minister elaborated while responding to a question about his current expenditures abroad.

Responding to a question, he said the PTI’s government did not provide fertilizer to the farmers and they had to import wheat to cover its shortfall whereas the coalition government had waived off fuel adjustment prices to the power consumers using 300 units.

The prime minister to a question, regretted and said that he had openly and repeatedly maintained that during the last 75 years, Pakistan was taken at a point, where they were considered by the outer world as seekers of financial help.

“Whether Imran Niazi went aboard with national coffers filled!” he added.

With the help of cronies and lackeys, he (IK) had secured NRO for his sister in a NAB case which also posed a huge question mark, he added.

The prime minister termed PTI chief as a real threat to country’s solidarity. The unfolding of facts had vindicated his stance that NAB-Niazi connivance had taken Pakistan to the brink of difficulties, he added.

To a question, he maintained that the relevant law and rules would be followed for the appointment of the next army chief.

Regarding resignations of the PTI legislators from the National Assembly, the prime minister said that they had never asked them to resign and hinted that they would welcome them if they return back to parliament.

About PTI’s condition of linking return to the assembly with holding of a probe over the alleged letter, the prime minister said that his meeting with Russian President Putin in Uzbekistan was an evidence which did not require further probe. They both had agreed to further promote Pak-Russian bilateral ties and trade.

The prime minister ruled out any prospects of reconciliation with Imran Khan due to his past attitude in the parliament.

Replying to a query, the prime minister said Nawaz Sharif would return back once the doctors allow him.

He said that vice chancellor of Government College was appointed by the Punjab government, however, Imran Khan’s speech to students was a highly condemnable act. He assured that they would take up the issue in the parliament, as it was an unpardonable act.

Replying to another question, the prime minister said that they had never regretted for coming into power. “We have resolved to save state of Pakistan from default, and even for it, I will not budge to sacrifice my life,” he stressed.

The prime minister said Miftah Ismail was a respectable member of the cabinet but he wanted to resign.

Appreciating his work, he said the former minister had done a very good job.

About return of Ishaq Dar, the prime minister expressed that he was well aware of the issues of finance as he was a hard-working man, capable and an honest politician, and hoped that he would further fine tune the economy.

About the oil prices in the global market, the prime minister said the government had only increased Rs1.50 per liter in petrol while did not raise diesel price.

The disparity between the value of US dollar and rupee was reflected in the price of petroleum products, however, he hoped that rupee would gain against the US dollar.

The person who had provided billions of rupees subsidies to the farmers and awarded millions of laptops to the deserving students, could never thought of burdening the pubic with price hike, he maintained.

He said the coalition government had been working round the clock not to burden the general public.

The government had allocated Rs70 billion for the support of flood affectees through Benazir Income Support Programme, he added.

The prime minister said he had never seen such a destruction in his lifetime as caused by the unprecedented floods in the country.

The prime minister said that the United Nations Secretary General had assured him to arrange a donors’ conference for the flood victims of Pakistan and had declared not to leave Pakistan in this time of difficulty.  French President Macron had also indicated his support to Pakistan, he added.