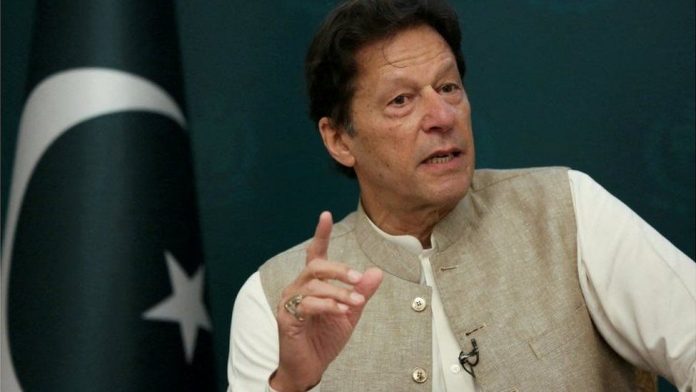 KARAK: PTI Chairman Imran Khan on Sunday once again talked about the appointment of the new army chief and said he is only concerned with merit-based appointments. Addressing a jalsa in Karak, Khyber Pakhtunkhwa, the former premier responded to Foreign Minister Bilawal Bhutto-Zardari’s comment that Khan wanted to “appoint an army chief of his choice.”  “Imran Khan has proved time and again to be an unguided missile for the country, its economy, politics and social cohesion,” Bilawal said, urging the PTI chairman to desist from questioning the patriotism of the defence institution and its commanders. Replying to Bilawal, Khan said: “They say Imran Khan wanted to appoint the army chief of his choice, but let me make it clear that I do not want an army chief [of my choice]. All I care about is merit-based appointment.” Criticising the Pakistan Democratic Movement (PDM) leadership, Khan said that PML-N Vice President Maryam Nawaz was “incapable of telling the truth” as he once again accused her of keeping nepotism above national interests.  “Maryam wants to import power plant machinery from India for her son-in-law,” he said while referencing a controversy which arose a day prior about leaked audio that has gone viral on social media.  The audio allegedly featured Prime Minister Shehbaz Sharif holding a discussion with an unidentified person and asking them about a power plant from India to be imported for Maryam’s son-in-law. “Our government had stopped trade with India because it broke international law and ended the special status of Kashmir,” Khan said, adding that PDM leaders came to power to enjoy “personal benefits.”  “The only reason for them to come to power is to continue with their corrupt practices. Whenever these people came to power, the debts of the country increased,” he alleged.  Khan, while further censuring PML-N’s leadership, said Nawaz Sharif’s sons live in houses worth billions of rupees that too in the most expensive area of London. “Even the prime minister of Great Britain cannot live in a house where Hassan Nawaz lives because it costs Rs10 billion,” he said. “And when questioned about where he acquired so much wealth from, Hassan said he was not answerable because he was not a Pakistani citizen”.Khan then talked about PML-N leader Ishaq Dar — who will be assuming the post of finance minister upon his return to Pakistan next week — and said that since his sons also live abroad, he is coming to power to mint money. The former premier then shed light on the economic situation of the country and said for the last 40 years, Pakistan had been “surviving on foreign aid”.”India and Bangladesh both are ahead of Pakistan [in terms of development]”.