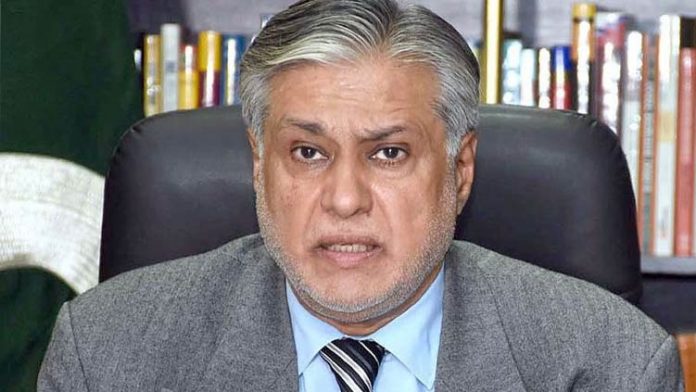 LONDON: Senior PML-N leader Ishaq Dar will return to Pakistan along with Prime Minister Shehbaz Sharif in his plane today – after five years of self-imposed exile in London – to “facilitate” the government in its efforts to resurrect the cash-strapped economy by taking over the key portfolio of the finance ministry. The top PML-N huddle, headed by party supremo Nawaz Sharif, decided on Sunday that Dar will fly out with PM Shahbaz Sharif on Monday morning from Luton Airport. Meanwhile, Miftah tendered his resignation Sunday, paving the way for Dar to take charge of Pakistan’s faltering economy at a time when inflation is touching new peaks and the overall state of the economy is in a dismal condition. Miftah will remain part of the government’s economic team, while Dar will lead it as the coalition government’s new finance minister. PM Shehbaz reached London on Saturday to meet his brother Nawaz and discuss the ongoing political situation of the country as well as the economic matters. Interior Minister Rana Sanaullah confirmed the return of Dar, who has been Pakistan’s finance minister four times in the past. “Dar is coming back to facilitate PM Shehbaz on economic affairs,” the interior minister said. Dar went to London in October 2017 and has remained there since then. He has maintained that he was targeted by the Joint Investigation Team (JIT), set up by former chief justice Saqib Nisar, in fake cases made in order to oust the PML-N when it was in power the last time. Dar became a key aide to Nawaz Sharif after the former PM reached London at the end of 2019 for his medical treatment. Dar spent time almost daily with Nawaz, advising him on key issues.He played a leading role during the preparations of the no-confidence voting against PTI chief Imran Khan and was the main point of contact for the Pakistan Democratic Movement (PDM) leaders from London. He took part in almost every meeting Nawaz held in London, and had a say in every decision the PML-N supremo made from London. Dar had been banned from appearing on Pakistani media throughout the PTI government’s tenure. He took to social media to air his views on economy and politics.