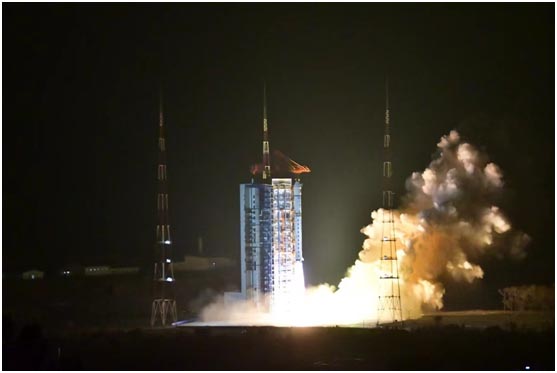 China recently released the world’s first H-Alpha spectral scanning imaging by its first solar observation satellite “Xihe” after the satellite has stayed in orbit for 10 months.

Xihe was launched on Oct. 14, 2021 and is traveling in a Sun-synchronous orbit about 517 kilometers above the Earth. As the first Chinese “photographer” for the Sun, the satellite has taken China into the era of solar exploration.

The H-Alpha waveband is the most responsive spectral line of solar activities in the lower atmosphere of the Sun.

According to Zhao, the major scientific payload of Xihe is an H-Alpha imaging spectrograph with  a resolution of 0.0024 nanometers, about 10 times higher than the resolution of ground-based optical filters, reaching the international advanced level. Each spectral scan image contains more than 300 photos, which is like a “CT scan” of the Sun’s lower atmosphere, namely the photosphere and chromosphere.

Apart from the H-Alpha waveband, Xihe also obtained spectral lines of neutral silicon atoms and neutral iron atoms. By studying them and based on the full-disk Doppler images of the photosphere and chromosphere obtained by Xihe, scientists are able to get the temperature, density and velocity of the Sun’s atmosphere and thus have a better understanding of the triggers and development of solar activities. It will help improve space weather forecast and ensure the security of mankind.

The Xihe satellite applies a magnetic levitation technology in orbit to increase accuracy and stability during operation. Besides, it has also verified multiple new technologies such as magnetic coupling wireless energy transmission, laser communication and wireless communication.

At present, Xihe is launching scientific observation as scheduled on a daily basis and has observed nearly 100 solar outbursts.

The observation data are open for world players to share, which marks China’s contribution to the science development of the world.

It is learned that China will launch an Advanced Space-based Solar Observatory this year to conduct observations on the solar magnetic field, solar flares and coronal mass ejections, to support the forecasting of catastrophic space weather.

Besides, Chinese scientists are further studying the structure of the Sun and the three-dimensional structure of solar activities, as part of Chinese efforts to contribute to the science development of the world.