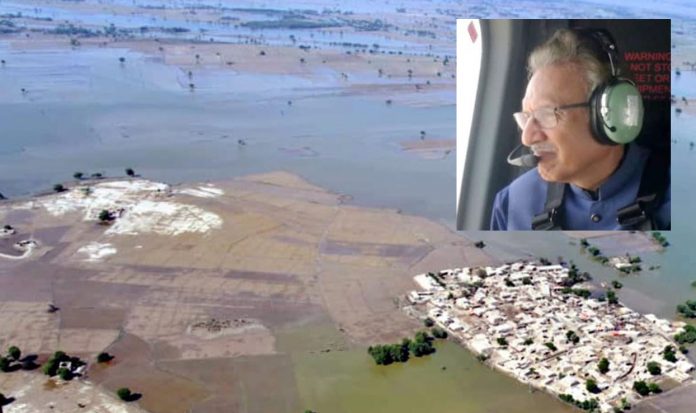 DADU: President Dr Arif Alvi Thursday said Sindh province had suffered massive losses due to devastating rains and floods and called for extensive measures to help people in time of distress and displacement in the country.

Talking to media at a relief camp in Government Pilot High School, he said :“This is probably the biggest flood in the history of Sindh with huge losses of entire crops.”

He pointed out rains and floods had also caused devastation in Balochistan, KPK and Punjab but the level of catastrophe was far bigger in Sindh province.

The President said the government was tirelessly working for rescue and relief of the affected people who were also being helped through Benazir Income Support Programme (BISP).

He said the country had never witnessed devastation on such massive scale and added the government could not cope with the situation single-handedly and urged international community to come forward for help of affected people.

He called upon the well-off people of Karachi and other parts of the country to come forward for the help and rehabilitation of affected people.

The President asked the government to take extensive measures for providing relief, shelter, education and health services to the affected people.

He said the floods had played havoc with millions of acres of farm lands besides destroying hundreds of thousands of houses.

The President observed that the climate change and the rising global temperatures paved the way for the massive floods in Pakistan. “Pakistan contributes minimally to the enhancing temperatures, but it is among the top affected in countries in the world” he added.

He underlined the need of taking immediate and effective measures to check the adverse effects on the climate change.

The President also interacted with the people at the camp and enquired about the facilities being provided to them.

The Dadu administration briefed the President about the rains, floods, displacement, losses and relief measures. He was apprised that crops cultivated on 247,000 acres had been destroyed.

The President announced funds of Rs 50 million for the flood victims of Dadu District.