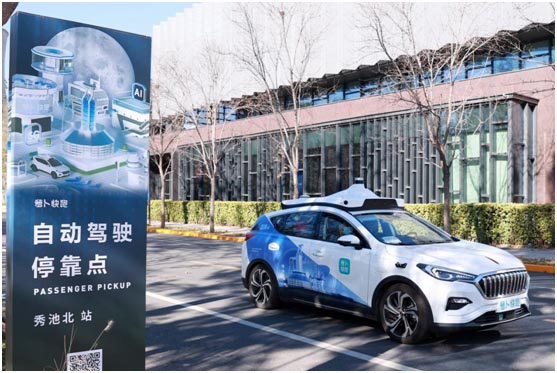 It is not the first policy supporting the auto-driving business issued by China in the recent days.

On Aug. 1, the country’s first regulation tailored for smart and connected vehicle management went into force in Shenzhen, south China’s Guangdong province. In July, Beijing issued permits to services providers that allow autopilot vehicles with a human safety operator in the passenger seat to collect fares.

These supporting policies demonstrated the country’s confidence in and expectation for Chinese autopilot technology.

Chinese tech giant Baidu, as well as autonomous vehicle technology companies Pony.ai and WeRide have been running commercial auto-driving business at different levels in a number of Chinese cities.

Chongqing citizens are now able to hail driverless vehicles on Apollo Go, an robotaxi hailing app developed by Baidu. Apollo Go’s robotaxis are equipped with laser radars on the rooftop, and they are able to carry passengers to destinations safely.

Apollo Go robotaxis would give way to pedestrians crossing the street when driving at night. When making a left turn at intersections, they would make sure that the oncoming lanes are clear. Besides, they are able to maintain a constant speed in heavy traffic.

Pony.ai is now testing its autopilot car-hailing services in a pilot area of auto-driving in Yizhuang, Beijing. Its vehicles make decisions based on actual traffic conditions and running speed. For instance, they can overtake the vehicles that are running slowly in front of them, and in another scenario where the traffic signal goes yellow and there’s no vehicle around, Pony.ai robotaxis would go through the intersection at a constant speed rather than slamming on the brakes.

Robotaxis have a great performance even when it’s raining or dark, as they have their “visions” – laser radars, cameras and millimeter-wave radars. With the equipment, they are better than human drivers at recognizing and tracking barriers, and comprehending traffic information. They can “see” their surroundings clearly in different road conditions, weathers and environments. Even in extreme weathers, they can drive safely.

There are even “drivers” standing by in control rooms that would take over the robotaxis and control them via 5G network when emergencies happen.

At present, Baidu has a testing fleet of over 500 vehicles that are running on open roads in nearly 30 cities of multiple countries and they have amassed a total of 32 million kilometers of real world driving data, said Xu Baoqiang, general manager of Baidu’s autonomous driving vehicle department.

According to Xu, Baidu’s Apollo Go service has received more than a million car-hailing orders in Beijing, Shanghai, Guangzhou and Shenzhen.

China will enjoy bright prospects in developing autopilot technologies. “Though China is a latecomer, it is leading the world in autopilot R&D and application thanks to its policy support and leading enterprises, as well as its advantages in capital, human resource, technology and industrial chain,” said Zhang Xiang, head of a new energy vehicle technology academy under Jiangxi New Energy Technology Institute.