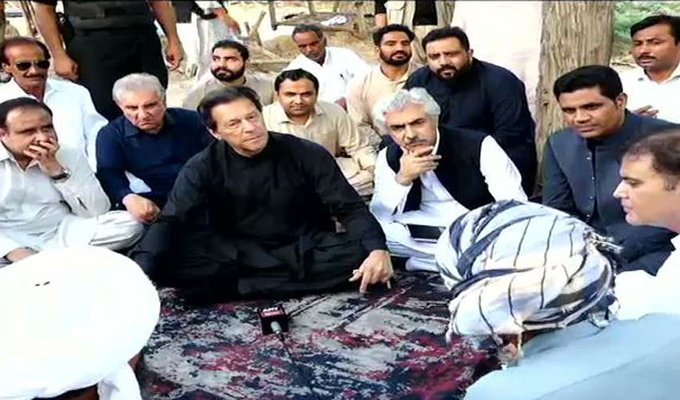 ISLAMABAD:PTI Chairman Imran Khan on Wednesday appeared before the joint investigation team (JIT) formed for a probe into a terror case filed against him, after ditching hearings thrice.The former prime minister arrived at the SPP office for a hearing as per the directives of an anti-terrorism court (ATC) that extended his pre-arrest bail for the second time on Monday.

Speaking to journalists after appearing before the JIT, Imran Khan said that he and his supporters will come out prepared as much as the government troubles them.

He lashed out at the coalition government over its alleged failure in controlling the economic crisis and said, “Pakistan is following in the footprints of Sri Lanka.”

He maintained that free and fair elections are the only solution to the economic crisis. He also criticised the government for doing politics amid floods and harassing the party’s donors.

“They are trying to crush my party,” Khan said and warned that the government could not withstand his protest call.

He maintained that they may hold negotiations with the government only on the topic of free and fair elections.

Responding to a question about his appearance before the JIT, Imran said that the case has become a joke before the world because the world know the “definition of terrorism.”

“I appeared before the JIT despite knowing it is a joke,” he said, adding that telling a government official that legal action will be pursued against them over “custodial torture” does not come under the umbrella of terrorism.

Moving on to the announcement of another series of countrywide protests, the PTI chair said that the government “will not be able to bear” a fresh call for protests.

He said that he had stayed quiet due to the economic situation and then the cataclysmic floods, thinking that his party would record peaceful protests.

“They banned the telethon when [we] started collecting funds for the flood affectees,” Khan said, while referring to the recent telethons his party held during which donors pledged Rs10 billion over five hours.