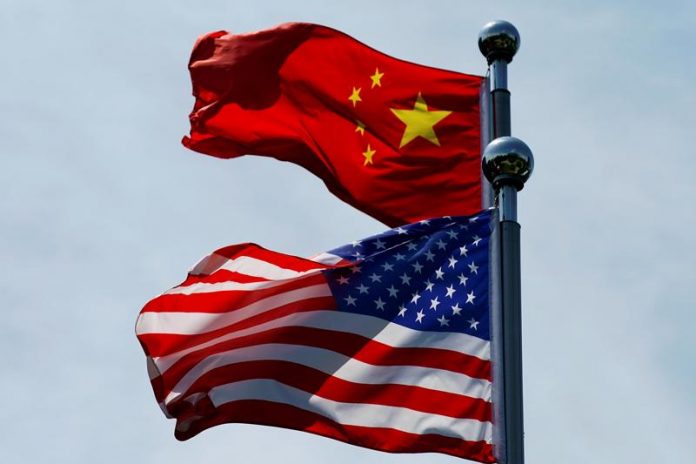 Such “long-arm jurisdiction,” which is barely coercion and bullying, seriously violates international law and the basic norms governing international relations. It sabotages the order and rules of international trade, and threatens the stability of global industrial and supply chains.

The U.S., waving the stick of unilateral sanctions, is hurting the common interests of the world when global recovery remains sluggish and global development faces severe challenges.

China follows an independent foreign policy of peace. It always holds an aboveboard position on international hotspot issues, and independently assesses situations on the basis of historical context and the merits of the issues.

The normal economic and trade cooperation carried out by China and relevant countries based on mutual respect, equity and mutual benefits, and under the framework of international law, must be respected and protected, and free from intervention and restriction by any third party.

For a long time, the U.S. has placed its domestic laws above international law and abused the national security concept and state power to weaponize and politicize economic and trade issues based on ideology, arbitrarily running against market rules and international trade order. It is a spoiler of global peace and stability, and a saboteur of global development and prosperity.

The imposition of broad economic and cultural sanctions has evolved from its beginnings as a modest arrow in the broad policy toolbox of the U.S. in the 1970s to become today’s foreign policy weapon of choice, said The National Interest on its website.

It’s totally unreasonable for the U.S. to force its domestic laws upon other countries. The U.S. always threatens other countries and interferes in their domestic affairs with unilateral sanctions and “long-arm jurisdiction,” forcing them to take sides on international hotspot issues and oppressing their enterprises in business competitions. The U.S. is trying to suppress and even deprive other countries of their legitimate development interests.

The abuse of unilateral sanctions by the U.S. is becoming a global public menace. The US imposed 3,800 sanctions on governments, individuals, organizations and market entities worldwide during the previous presidency. That’s three new sanctions a day on average. No wonder an American media outlet called the U.S. a “sanctions superpower.”

The world is in urgent need of solidarity and cooperation to cope with the slow global recovery. The U.S. abuse of unilateral sanctions hurts the legitimate interests of relevant parties, undermines international exchanges, and hinders the international communication over macroeconomic policies. It also weakens the international society’s capability in coping with global energy, food and financial crises, dragging the world into bigger troubles while bringing inevitable consequences to the U.S. itself.

Besides, the unilateral sanctions are leading to rising commodity prices in the U.S., placing huge burdens on U.S. citizens.

Edward Fishman, senior fellow with the Eurasia Center of American think tank Atlantic Council, noted that there’s scant evidence that U.S. policymakers’ growing ambitions for sanctions have been matched by any rise in America’s ability to achieve the policy outcomes that it seeks. “On the contrary, by almost any measure, U.S. sanctions policy is failing,” he said.

In today’s world, no country is able to deal with challenges alone or accomplish everything all by itself.

Abusing unilateral sanctions and forcing its own wills on others, the U.S. would only see its “leadership” further loosening. The country should correct its wrongdoings, stop its groundless oppression on Chinese entities and individuals, and play a constructive role in maintaining the stability of global industrial and supply chains and in promoting global recovery.

(Zhong Sheng is a pen name often used by People’s Daily to express its views on foreign policy and international affairs.)