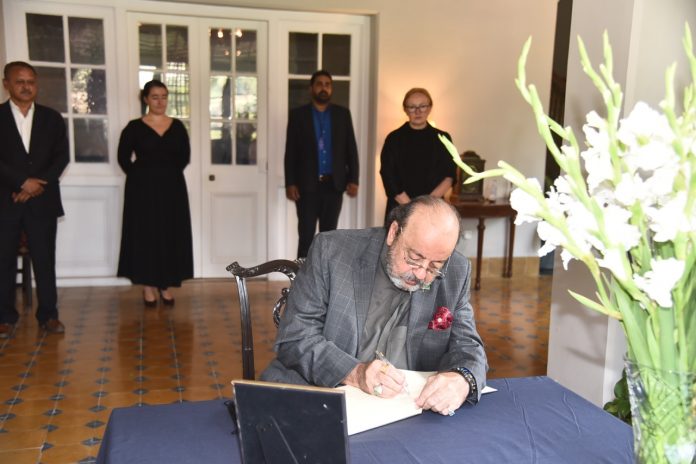 Karachi : Acting Governor Sindh Agha Siraj Durrani arrived at the British Deputy High Commission in Karachi on Saturday, where he expressed his grief over the death of Queen Elizabeth II to the Deputy High Commissioner and recorded his comments in the condolence book kept in the Deputy High Commission. Acting Governor Sindh expressed his condolences to the royal family and said that Queen Elizabeth led United Kingdom in a very prudent manner. Queen Elizabeth always expressed good feelings for Pakistan and her services for Pakistan especially Sindh will always be remembered. The people of Pakistan share the grief of the royal family, the government and the British people,he added and said that Queen Elizabeth’s long reign will be remembered for her strong sense of duty and determination to dedicate her life to her people. Acting Governor further said that Queen Elizabeth showed great sense of responsibility and commitment from an early age and she dedicated her life to the British people with many years of experience which instilled love for the royal family in her nation. Agha Siraj Durrani said that her character had many things that British citizens look for in them, including humility, , wisdom, sense of duty and a lot of politeness. He further said that undoubtedly, Queen Elizabeth won a prominent position not only in her homeland but also in the underdeveloped countries with her vision. This is the reason why the pain of her passing away is being felt even in the under developed countries, especially Pakistan, where the Queen of Great Britain visited twice and raised hopes of development in this nation.