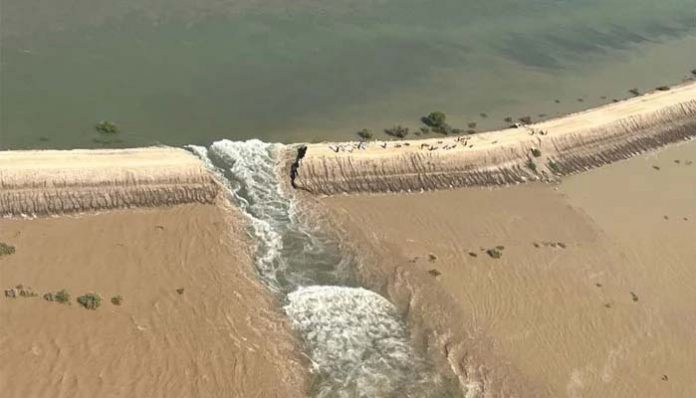 KARACHI:The embankment at Manchar Lake was breached at two more points to lower the reservoir’s water level which remained dangerously high, posing a threat to adjoining areas.The new cuts were made near the RD-50 and RD-52 points in Pakistan’s largest freshwater lake.

Nearly a third of Pakistan is under water — an area the size of the United Kingdom — following months of record monsoon rains that have killed 1,300 people and washed away homes, businesses, roads and bridges.

Manchar Lake, which lies west of the Indus River, varies in size according to the season and rainfall, but is currently spread over as wide an area as anyone can recall.

Sindh Irrigation Minister Jam Khan Shoro said the water level in the lake had not receded despite a controlled breach on Sunday. However, the pressure in Dadu, Khairpur Nathan Shah and Mehar would ease after the new cuts, he said.

Meanwhile, water from the lake inundated hundreds of villages along the Indus Highway near the Sehwan toll plaza and Bobak-Sehwan link road. Hundreds of people were trapped in their houses in Jaffarabad and Wahar union councils. Authorities concerned have directed the administration to evacuate people.

Reports said that heavy pressure in the MNV drain had put thousands of people living in Dadu at risk. The water is one foot below the dam of the MNV drain near Kari Mori. Machinery has reached Kari Mori to strengthen the drain.

The 2.5 times increase in the volume of the assistance programme has been made in view of damages to infrastructure and crops in the wake of flash floods.