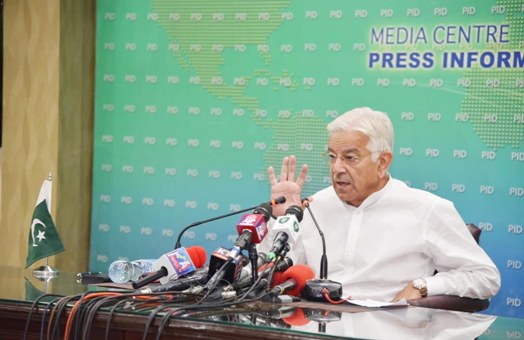 ISLAMABAD: Minister for Defence Khawaja Muhammad Asif on Tuesday accused the former prime minister and PTI Chairman Imran Khan for attacking the country’s economy and defence institutions under the inimical designs of the enemies of Pakistan.

Addressing the media briefing held here, the minister said after independence our perpetual enemy India had two main targets of economy and defence namely the armed forces to weaken Pakistan.

Minister said, “Yesterday in Faisalabad Imran Khan made comments on COAS (Chief of Army Staff) appointment. If people like Khan will be made the focus of processions then they will harm the defence related interests of Pakistan. In the past few months Imran Khan clearly targeted these two areas.”

Asif added that the Pakistan Tehreek-e-Insaf (PTI) chairman during his tenure in October past year started making the matter of appointments in the armed forces as a topic of public discussion.

“We passed the no confidence motion after his allies decided to leave him [Imran Khan]. But after that he started targeting forces and called them names like neutrals and animals,” he said.

Khawaja Asif emphasised that the pattern of past four months showed that he was targeting Pakistan’s economy and defence.

“Yesterday, Khan alleged that the senior generals next in line to be COAS are going to provide illicit protection to the misappropriations of the Pakistan Democratic Movement (PDM) leadership.”

He underscored that it was not the job of the armed forces rather they had sworn in to defend the masses and motherland.

“There’s no commitment in their oath to defend the politicians if they do so then they will violate their own oath. Imran Khan is on record for saying that they cannot be neutral and he demanded protection from them.”

The Minister lambasted Imran Khan for his accusations and said that it was not the PDM leadership rather he himself would need security for his corruption made in foreign funding case, Tosha Khana case, Malik Riaz gift case, and Bahria Foundation case whereas in the latter he had not denied the gifts received from Malik Riaz.

“The Armed Forces will never do that and they will only defend the honour and security of the motherland for which they spill their blood.

Imran Khan’s accusations are a disrespect of the sacrifices of the armed forces,” he maintained.

The Defence Minister underscored that the armed forces of Pakistan had a long tradition of sacrifices where three star general and there only children embraced martyrdom in war against terrorism.

Recently, he said in the helicopter crash in Winder the martyrdom of three star general, two star general and other officials took place while serving nation in crisis, adding, “Our history has a great number of sacrifices. Our armed forces are playing lead role in disaster relief efforts.

There are areas where civil administration cannot approach the armed forces have committed their all out resources for the affected population.”

He regretted that the PTI Chairman was using helicopters for hours and people died waiting for five hours on stones after getting washed away by a deluge.