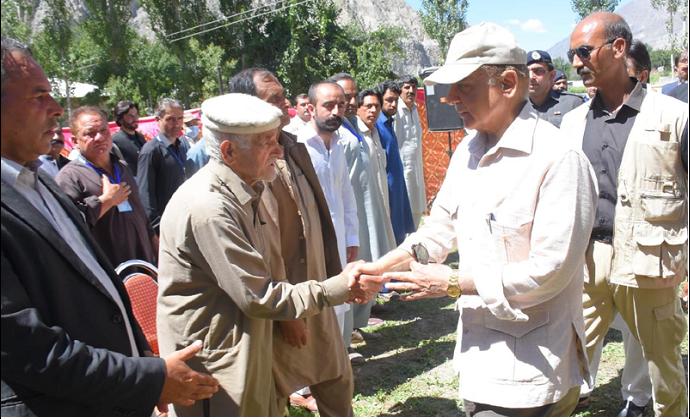 GHIZAR: Prime Minister Shehbaz Sharif on Friday announced Rs 100 million for the rehabilitation of Bobar village in Gilgit’s Ghizar district badly affected by the flash floods. The prime minister, during his visit to the village, was told in a briefing that the floods had killed 17 people and damaged 249 houses in the village. Moreover, 794 animals and several orchards were also washed away during the calamity. The prime minister ordered the authorities concerned to pay compensation of Rs 1 million each for the families who had lost their dear ones in the catastrophe. Moreover, he also ordered the construction of a five-kilometer metal road to facilitate the villagers. Shehbaz Sharif said he had instructed that within 24 hours the compensation announced by him should be given to the 17 families whose loved ones departed. Talking to the flood affectees, the PM said the torrential rains and flash floods in the country during this monsoon were unprecedented. He said the floods ravaged vast areas in Sindh, Balochistan, Khyber Pakhtunkhwa, South Punjab, and Gilgit Baltistan. More than 1000 people lost their lives, thousands were injured, standing crops on tens of thousands of acres were destroyed, millions of livestock and houses were damaged, he said adding Pakistan was already facing a severe economic crisis.He expressed anguish over the plight of the girl whose eight members of the family including her mother, grandmother, and six brothers and sisters lost their lives in the floods. He said after a survey, the government would compensate those whose houses were destroyed. “I assure you that the assistance will be delivered transparently and without considering politics.” He thanked the friendly countries including China, the United States, Turkey, and the United Arab Emirates for their assistance. “Today I met a high level delegation of the Turkey and the Turkish President pledged to give all kind of assistance.” In an interaction with the affected villagers, the prime minister assured the flood-stricken people that the government would not leave them alone until all of the families were rehabilitated. The prime minister expressed condolence over the loss of lives and properties and assured the victims of the government’s all-out support for their relief and rehabilitation.