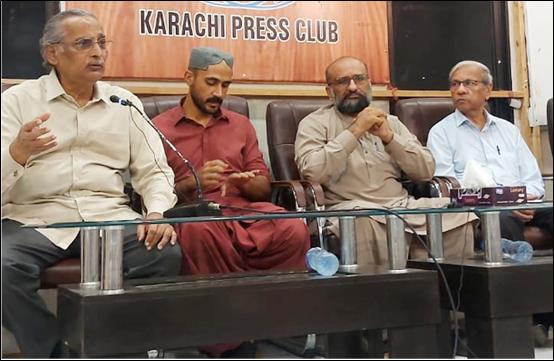 KARACHI: Suggesting the government to temporarily freeze payments of all foreign loans and immediate lifting ban on international NGOs, the civil society leaders here Friday demanded urgent import of edibles from all sources including India to avert a famine and massive starvation approaching fast after unprecedented monsoon rains in the country. According to details, civil society and trade union leaders arranged a press conference which was conducted by Zehra Khan of Home Based Women Workers Federation (HBWWF) at the Karachi Press Club (KPC) here Friday to discuss the post-rains situation in the country, especially in Sindh. It was addressed by Faisal Edhi of Edhi Foundation, Zulfikar Ali Junior, the grandson of Shaheed Zulfikar Ali Bhutto, noted legal expert Rashid A Razvi, Nasir Mansoor of National Trade Union Federation (NTUF), Karamat Ali of PILER, noted economist Dr Kaiser Bengali, Khizr Qazi of HRCP, Dr Mirza Ali Azhar of Pakistan Medical Association (PMA) and others. Zulfikar Ali Bhutto Junior thanked the Edhi Foundation for its relief work in the flooded areas. He said he fully supports Edhi Foundation, adding his father Shaheed Mir Murtaza Bhutto also used to support Edhi. He said the Edhi Foundation is the most active emergency relief organization in Pakistan. He said it is catastrophic situation in Sindh which demands massive rescue and relief work. He appealed to all stakeholders to take steps on war footing basis to save the flood hit people. Faisal Edhi said that despite all efforts of all relief organizations and agencies including the Edhi Foundation hardly ten percent people could be approached so far, while remaining ninety percent flood hit people are still to be reached out to. Dr Mirza Azhar of PMA said that we had already warned the government of floods and destruction but no heeds were paid to our cries. He said diseases and deaths have started to emerge from the flooded areas. He said the situation is quite worrisome.He appealed to the pharma companies to donate basic medicines as they are needed on emergency basis. He said some vested interests are also exploiting the situation and the government should stop them and allow only the genuine NGOs to collect donations from public. He said government silos of wheat have been damaged in affected districts and millions of tons of wheat have been washed away. He said a severe food crisis is looming large over the country.