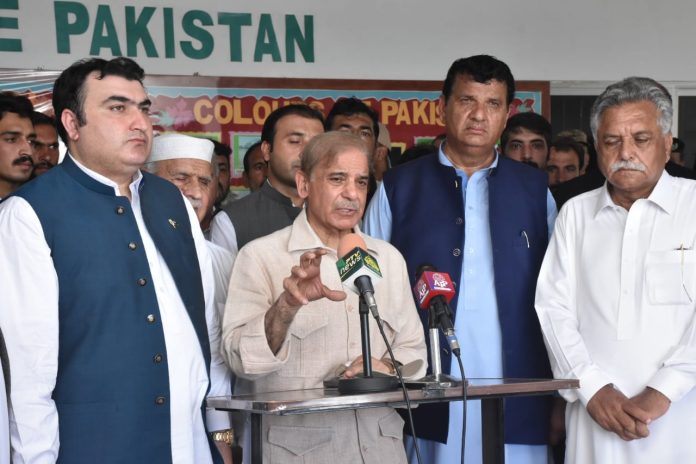 KANJU: Prime Minister Muhammad Shehbaz Sharif on Wednesday announced Rs10 billion grant for the flood-affected populace of Khyber Pakhtunkhwa as flood relief assistance. Addressing a gathering of flood-affected people here, the prime minister said that the amount would be spent for the relief and rehabilitation of the flood-hit people of the province. The federal government, National Disaster Management Authority and the provincial administration, through close coordination, would ensure transparency and immediate disbursement in the affected areas, he added. The prime minister said earlier, the federal government had already announced Rs15 billion for Sindh province and Rs10 billion for Balochistan province respectively. The prime minister opined that it was a collective responsibility of all the governments to work for the provision of relief to the flood-hit public and ensure that the allocated grants should be spent in a transparent manner and upon the deserving people. “I will continue visiting the affected areas till the last affected person is rehabilitated,” he added. He said that the federal government had allocated an amount of Rs 28 billion which was being disbursed among the affectees through NDMA and Benazir Income Support Programme. He said every affected family was given a cash amount of R25,000 whereas per family was entitled to Rs1 million that had lost its near or dear one. The prime minister while expressing his grief and pain over the large-scale tragedy said that more than1,000 lives had been lost including 300 children. He said the cash support extended by the federal government was no substitute for the loss of lives as the bereaved families would continue to mourn the death of their relatives for long, but it was the responsibility of the government to provide maximum comfort in this hour of grief.