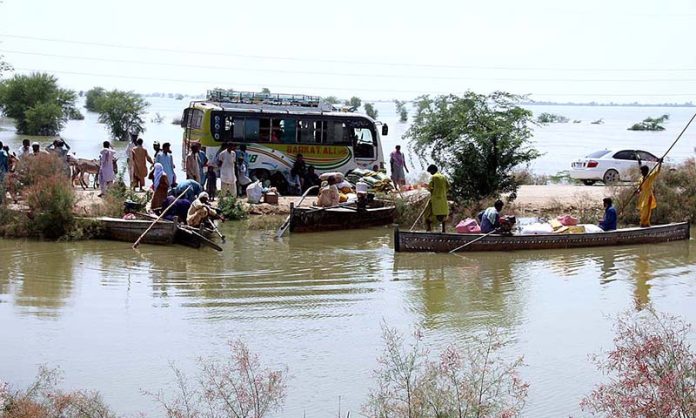 KARACHI: Flood torrents coming from the mountains are submerging cities in Sindh following stormy rains,  The floodwater has inundated most areas in Dadu district as hundreds of villages in the Dadu tehsils of Mehar, Khairpur and Nathan Shah and Juhi have been flooded. People are still being evacuated from the affected areas. Water has inundated 70% of the city of Juhi. The last defence line of the city, the Ring Dyke is being strengthened. Citizens are helping to reinforce the bund to save the city from inundation. Floodwaters have reached the Ring Dyke near Juhi College, severing the land link between Tehsil Juhi and the district headquarters. Furthermore, Juhi’s land connection with Bhan Saeedabad has been severed. Floodwaters have inundated the N55 Indus Highway from Khairpur Nathan Shah to Mehar, suspending vehicular traffic from Mehar to other areas in Sindh, Balochistan, and Punjab. The flooding has impacted over 300 villages located in the Catchment area of the Indus River. The high flood in the Indus River affected the catchment areas in Khairpur too. Flood torrents are heading towards Mehar and Khairpur Nathan Shah. Another five breaches appeared in the Left Bank Outfall Drain, pushing the overall number to 12.The flood level is gradually rising at the Akil Agani Loop Bund in the Indus River with inflow clocking in at 600,000 cusecs. It is due to the flooding of crops, roads, markets and shops that there is a severe shortage of food and potable water in the flood-hit areas in the province. There is an emergency situation in the Sajawal and Wara tehsils due to the breach of a dyke in Qamber Shahdadkot. The breach has left hundreds of villages submerged under water. Meanwhile, severe flooding continues at Manchar Lake. The displaced people, along with their children, are sitting on roads under the open sky because they have nowhere else to go.