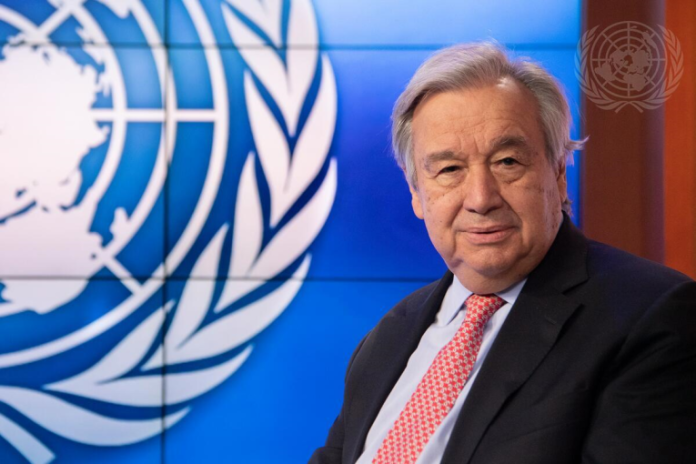 UNITED NATIONS:United Nations Secretary-General Antonio Guterres will visit flood-battered Pakistan next week to see for himself the “tragic situation facing millions of men, women and children” in the worst impacted areas of the country, his spokesman said Tuesday.

Pakistan’s UN Ambassador Munir Akram, who met the UN chief yesterday, and Asim Iftikhar Ahmed, the Foreign Office spokesman, welcomed the UN chief’s move, saying they look forward to his visit which begins with his arrival in Islamabad on Friday, September 9.

Guterres is so far the first world leader to announce such a trip to show solidarity with Pakistan where the worst-ever floods have killed more than 1,000 people and displaced some 43 million.

Through its National Disaster Management Authority, the Pakistani Government – which has declared a national emergency – is leading the response in coordinating assessments and directing humanitarian relief to affected people.

Spokesman Stephane Dujarric told the regular noon briefing that the secretary-general, who earlier said, “Pakistan is awash in suffering,” will travel to the areas most impacted by this unprecedented climate catastrophe.

“The Secretary-General will meet with displaced families that will also witness how we are working in collaboration with our humanitarian partners to support the government’s relief efforts and provide assistance to millions of people,” the spokesman added.

The UN chief will be back in New York on September 11.

“We warmly welcome the Secretary-General’s decision to visit Pakistan,” Ambassador Akram said in an interview with APP in New York.

“This is a demonstration of his solidarity with the people and Government of Pakistan in this hour of need and his determination to mobilize the entire UN system to respond to this human catastrophe,” the Pakistani envoy added.

Welcoming the visit, Foreign Office Spokesman Asim Iftikhar, who spoke from Islamabad to the UN correspondents in New York via video-link, said that the SG’s visit is in planning stages but he is expected to be taken to the most affected areas in the provinces of Sindh, Balochistan and of rural areas of Khyber Pakhtoonkhawa.

Sitting besides him was Julien Harneis, the UN Resident Coordinator in Pakistan.

In his video message message at the launch of $160 million Flash Appeal, the secretary-general said the Pakistani people were facing a “monsoon on steroids” — the relentless impact of epochal levels of rain and flooding.

“In my prior position as (UN) High Commissioner for Refugees, I witnessed the enormous giving spirit of the Pakistani people – welcoming and protecting
millions of Afghan refugees – and in many cases sharing their limited resources,” he said.

“It breaks my heart to see these generous people suffering so much,” Guterres said, noting that the Government of Pakistan has released funds, including immediate cash relief.

Briefing the press in New York, Spokesman Asim Iftikhar summed up the damage as “colossal, huge and countrywide”, saying that the government of Pakistan has employed all its resources to provide relief to the affected people and that the entire nation has joined the effort.

But, he said, the task was enormous, beyond the country’s capacity, and that’s why Pakistan has called for international help

Pakistanis, he said, are resilient people and will fight this climate-induced disaster.

The Pakistani spokesman gave details of what the country has done to meet the needs of marooned people, but said that the requirements for the next phase — reconstruction and rehabilitation — will be huge, an estimated $10 billion.

He said several countries, including Turkey, UAE, China and Qatar, were already helping Pakistan in a big way.

Asked how long it will take to accomplished the task, Iftikhar said it was going yo be a long haul.