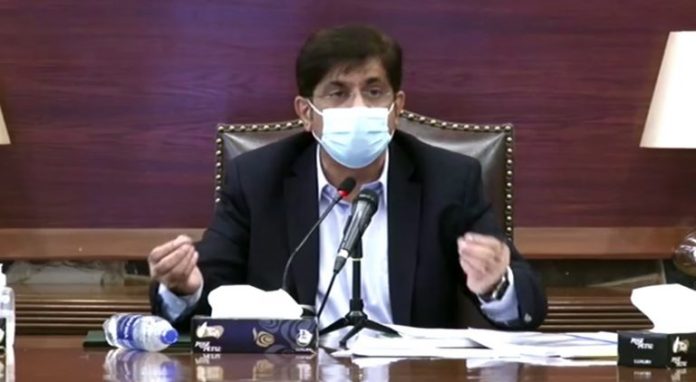 KARACHI: Sindh Chief Minister Syed Murad Ali Shah has directed Irrigation and Wapda authorities to keep strict vigilance on Main Nara Valley Drain (MNV), Indus Link and Johi branch by strengthening their embankments to protect main cities of Sehwan, Old city of Mehar,  Johi and portions of Dadu. He issued these directives during his visit to Manchhar, Dadu and Johi on Monday. He was accompanied by provincial ministers, Nasir Shah and Mukesh Chawla. MNAs Rafiq Jamali, Sikandar Rahpoto, MPA Shajila Leghari and others joined hm at Sehwan and Dadu. Irrigation Superintendent Engineer Shafaqat wadho briefing the chief minister at Manchhar Lake said that the hill torrents from Balochistan which has the catchment areas of Sibi, Bolan  Khuzdar and other cities has developed four to five breaches in Flood Protective (FP) Bund starting from Chaki, as a result water has started entering the areas of Shahdadkot, Kubu Saeed Khan and some adjoining settlement. Mr Wadho said that mian Ghar Drain was flowing inward, thereby posing danger to Gaji Khuhar. The CM was told that the breaches occurred in Suprio Bund last night at RD52 and RD 12 were exactly opposite the towns of Mehar and K.N Shah. He said that Johi branch was flowing over its capacity, therefore it was given a relief cut to protect the main towns. The chief minister said that with the breaches in FP Bund means its water was gushing out to the MNV drain staring from Hamal Lake. He added that this water would bring floods in KN Shah, Western side of Mehar and Johi. Therefore, the chief minister directed Irrigation authorities to erect an embankment at Johi and Mehar- at Bypass so that these towns could be protected from the flood.   During the presentation and discussion between the Irrigation experts and the chief minister it was concluded that the water would ultimately end up in Manchhar which was already in a precarious condition with a water level of 120.75 RL. The chief minister said that the River Indus was already in high flood, therefore it won’t accepting water from the drains. Mr Shah directed Irrigation department to start strict vigilance of Indus Link to save Sehwan and its villages. SE Irrigation Shafqat Wadho told the chief minister that in 2010 floods the River was carrying/accepting water of Manchhar Lake but this time the Indus course is contrary to the 2010 situation. Keeping in view the serious situation, the chief minister decided and directed the Irrigation and Wapda authorities to arrange machinery and start strengthening protective band and erect bunds at Mehar Bypass, Johi and KN Shah to protect them from the water coming down from Balochistan.