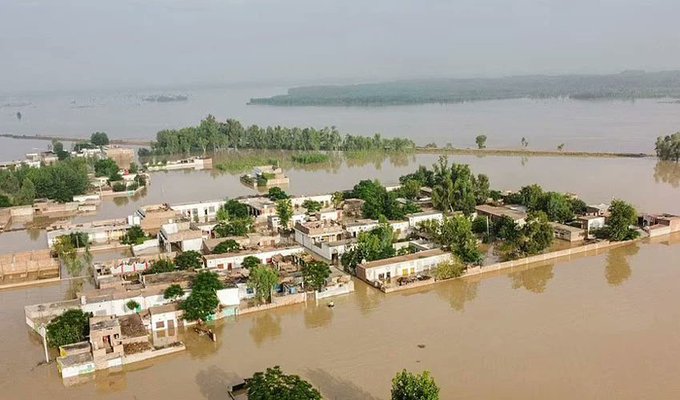 ISLAMABAD: More than 33 million affected as torrential rains cripple life Countrywide death toll crosses 1,000; more than 1,600 injured; 735,375 livestock dead; 1,051,570 houses damagedFlash floods triggered by heavy monsoon rains across much of Pakistan have killed over 1,061 people and displaced thousands more. Powerful flash floods in the Khyber Pakhtunkhwa caused the Kabul River to swell, sweeping away bridges overnight, cutting off some districts from road access. Downstream, fears of flooding around the river banks prompted thousands in the district of Charsadda to flee their homes, according to disaster officials, with some spending the night on highways with their livestock, miles away from their inundated villages and towns. The picturesque Kalam Valley in Khyber Pakhtunkhwa province is one of the areas most affected by the rains and flooding. Waters from overflowing rivers swept away entire buildings, including an iconic hotel. The monsoon season, which began earlier than normal this year, has lashed Pakistan with particularly heavy rains and rescuers have struggled to evacuate thousands of marooned people from flood-hit areas. The crisis forced the government to declare a state of emergency. Historic monsoon rains and flooding have damaged more than 950,000 homes while over 800,000 animals were killed. Over 3,400km of roads and about 150 bridges were severely damaged In Balochistan all 34 districts of the province were badly affected by heavy rain and flooding and road networks were destroyed and bridges washed away and relief was only possible by deploying helicopters, which are not often able to operate because of bad weather. Provincial officials have confirmed over 250 deaths but the number was expected to increase significantly after communications are restored. In Punjab, the Rajanpur district appeared to be the hardest hit along with the district of Dera Ghazi Khan. Thousands of mud and brick houses were inundated by water, most of them completely demolished or at least partly destroyed. Residents made homeless by the flood took shelter on higher ground, where they waited for relief goods and other help. In Sindh, so far 349 people have been killed by floods with over 170,000 houses destroyed and crops spanning 2,800,000 acres were severally damaged. Pakistan Army has joined the national and provincial authorities in responding to the floods and COAS on visited the areas which has been hit heavily by the rains. “The people of Pakistan are our priority and we won’t spare any effort to assist them in this difficult time,” said Army Chief General Qamar Javed Bajwa. On the other hand, government have appealed to the international community for help and plan to launch an international appeal fund. The foreign affairs ministry said Turkey had sent a team to help with rescue efforts.