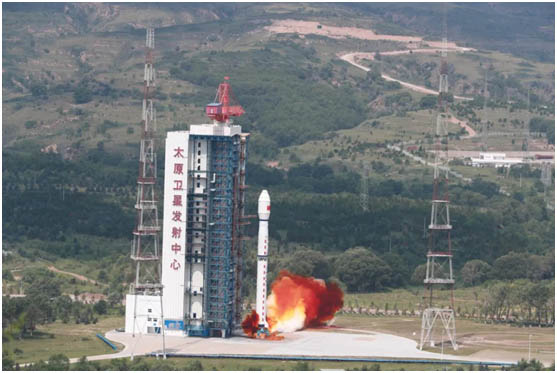 Named “Goumang,” the satellite is expected to provide remote sensing services and improve the efficiency and accuracy of carbon sink measurement, providing important support for the country’s efforts to peak carbon dioxide emissions before 2030 and achieve carbon neutrality before 2060.

As a scientific research satellite under the framework of China’s medium and long-term development plan of national civilian space infrastructure, Goumang will operate in a sun-synchronous orbit at an altitude of 506 kilometers, inclined 97.4 degrees, according to Cao Haiyi, chief designer of Goumang.

The satellite is able to detect and measure such factors as vegetation biomass, atmospheric aerosol and chlorophyll fluorescence through comprehensive remote sensing means, including laser, multi-angle, multi-spectral, hyperspectral, and polarization.

Moreover, the satellite will also meet the needs for the determination of vertical control points, disaster monitoring and evaluation, and agricultural forecasting. It will significantly boost quantitative land remote sensing in China.

The satellite can obtain information about global forest carbon sinks through both active and passive remote sensing. This will help enhance the country’s capability to monitor and measure carbon sinks in various ecosystems, including forests, grasslands, wetlands and desertified land.

Through statistical analysis and application tests, the research and development (R&D) team has managed to use five laser devices on the radar to emit laser beams 200 times in one second, eventually shortening the distance between two objects to be monitored from several thousand meters to several hundred meters and significantly improving the accuracy of plant height measurement.

The satellite’s ability to accurately map the distribution of chlorophyll fluorescence offers important support for the efficient and precise measurement of carbon sinks. To improve the accuracy of detecting the spectrum of chlorophyll fluorescence, which emits only a very small amount of energy, a hyperspectral detector has been installed in the satellite and the theory of grating spectrometer has been applied, which increased the spectral resolution by tenfold, enabling the device to detect even the most subtle change in daylight intensity.

The launch of Goumang marked the 430th mission of the Long March rocket family. Also launched on the same rocket were two small satellites, namely the Jiaotong 4 and the Minhang Youth.

The Jiaotong 4 will be used to collect information about ship movements and flight statuses around the globe, as well as information about the global Internet of Things (IoT). The Minhang Youth, which is designated as a platform for young students to partake in space science research and engineering practice activities, including satellite design, satellite R&D, satellite payloads, and satellite launch, will carry out applied scientific research on space-Earth integrated carbon source monitoring.