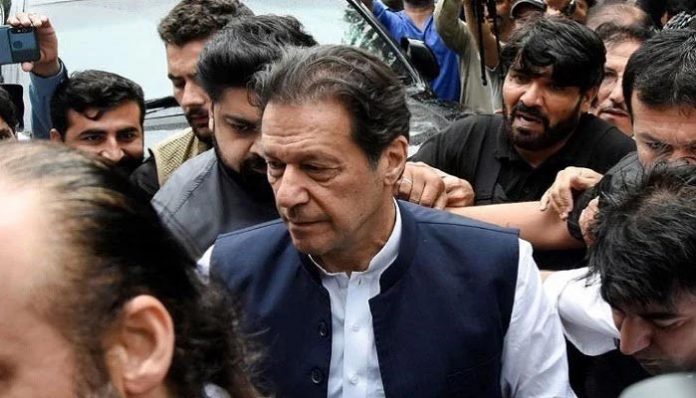 ISLAMABAD:PTI Chairman Imran Khan on Thursday secured pre-arrest bail in the terror case filed against him for threatening Additional Sessions Judge Zeba Chaudhry during a public rally, shortly after he appeared before an anti-terrorism court (ATC) in Islamabad. The ATC accepted the ex-prime minister’s bail plea against a surety of Rs100,000, stopping the police from arresting Khan till September 1. The court also issued notices to the police and petitioner. Khan’s bail will be reviewed now at the hearing on September 1. Khan appeared in the ATC in person where judge Raja Jawwad Abbas heard his plea. Meanwhile, speaking to the media outside court, PTI chair Imran Khan urged those “making and influencing” decisions to consider the country. He said the world is making fun of Pakistan over news of him being booked in a terror case for intending to take legal action against officials whom he alleges are involved in the torture of his chief of staff Shahbaz Gill in prison. “Torture and sexual abuse was inflicted on Shahbaz Gill and when I said that I’ll take legal action against the police officials involved and the magistrate who sent Gill into police custody despite torture being proven in court, I was booked in a terror case,” he said. He said when news of this spread across the globe it gave an impression of Pakistan being a banana republic. Khan went on to say that he would advise those — who are making and influencing such decisions — to think about the country. “They are terrified of PTI’s power [..] and are trying to get the head of the biggest party arrested in this case just for a technical knockout and to save themselves,” he added. At the outset of the hearing, Khan’s counsels Babar Awan and Muhammad Ali Bukhari termed the terrorism case against Imran Khan “political victimisation” while filing a petition seeking his pre-arrest bail. The lawyers urged the ATC judge to grant Imran Khan pre-arrest bail in the terrorism case. In their petition, they said that the police lodged a terrorism case against Imran Khan as “revenge”. Opening his arguments, Khan’s counsel Babar Awan raised a question that according to the prosecution, his client threatened IG, DIG Islamabad and a female judge during his Islamabad address but they are not complainants, adding that a magistrate is a plaintiff as per the FIR. Awan asked, “Are the words ‘shame on you’ threats?” He maintained that these words are often used in our society. “In his address, my client had warned that he would file cases against the IG and the DIG,” Awan said, adding that he had warned about taking legal action cases but didn’t threaten to murder. Imran Khan did not say that he would kill anybody, he argued. Urging the court to grant Imran Khan interim bail, the lawyer said that it is expected that the police would arrest his client.