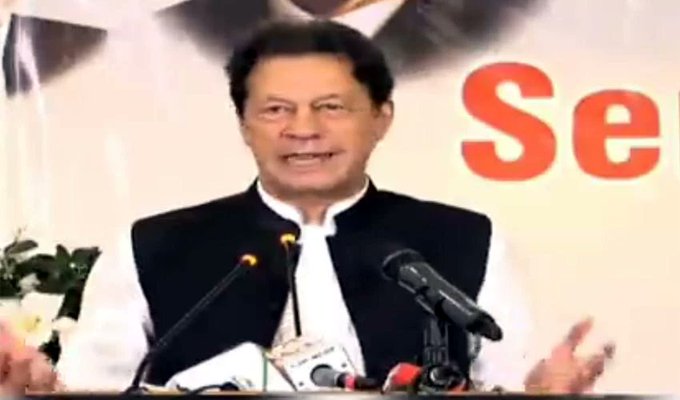 ISLAMABAD: PTI chairperson and former prime minister Imran Khan Monday said that he was unaware about the statements made by party aide Shahbaz Gill on a private TV channel that eventually led to his arrest.

Speaking at the seminar on the independence of the judiciary in the federal capital, Khan said that Gill later informed him about the comments he had made.

Khan, during the speech, said that Gill was taken into custody without any arrest warrants. “Gill was stripped naked and his pictures were taken,” he added.

The former PM said that the magistrate found out from the report that his chief of staff was tortured, however, he was still sent to the police.

Separately, while presiding over a parliamentary party meeting at his Bani Gala residence, Khan dared the coalition government to arrest him.

Earlier today, the former prime minister secured transit bail for three days till August 25 after he filed a pre-arrest bail application in the Islamabad High Court earlier to avoid arrest in a terror case filed against him last (Sunday) night.

A first information report (FIR) was registered against Khan under the Anti-Terrorism Act (ATA) for threatening an additional sessions judge and senior police officers of the Islamabad Police at a rally in the federal capital’s F-9 Park.

“The way the public took to streets, they [coalition government] cannot do anything. They just want to instill fear among the nation and can only show fascism,” said Khan while talking about the protest staged by his supporters following the reports of his possible arrest.

Scores of PTI supporters across the country took to the streets to launch their protest against the possible arrest of the former prime minister.

During the meeting, the members discussed the political situation of the country and the law and constitution being broken by the government.

A detailed discussion about the party’s future course of action and “Haqiqi Azadi” took place.

The party members condemned the partial acceptance of resignations tendered by the MNAs, demanding the approval of the resignations.

Following the ouster of the party chief through a no-confidence motion, the PTI MNAs tendered their resignations en masse which were accepted by former deputy speaker Qasim Suri.

The party members also condemned the alleged partnership between the speaker of the National Assembly, the Election Commission of Pakistan and the incumbent government. They also denounced the case registered against their party chief.

According to sources. the PTI’s parliamentary party rejected the option of returning to the National Assembly.

Sources privy to the matter said that the party’s core committee decided that the MNAs will not return to the assembly in any case and that the only option left is to announce elections.

The PTI chief issued instructions to the parliamentary party to prepare for the elections, directing them to visit the constituencies and interact with the public, added the sources.